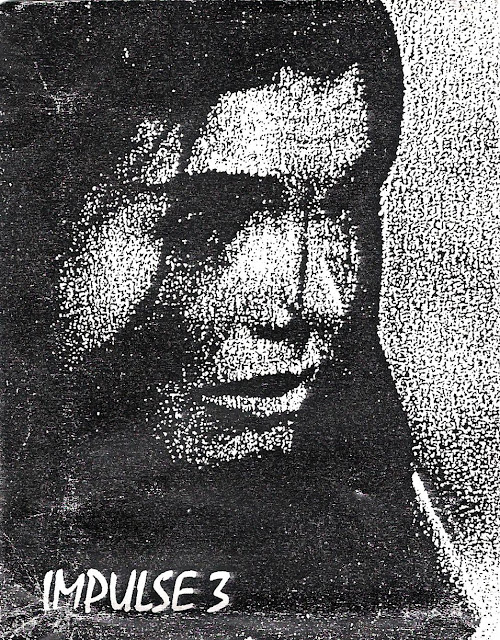 You will recall Impulse, the magazine which came with a compilation tape, either from Impulse 2 which I posted here, or perhaps even from reality (and in case anyone is wondering - no, I never saw the first issue). Well, here's another volume, short and sweet but with some great tracks. You will be familiar with some of the artists, perhaps not all, in which case, Google is your friend, as snidey forum dwelling internet wankers used to say and probably still do. Out of this lot, the big surprise for me was just now finding out that Cathedra was actually Mark who edited the mag and eventually joined Konstruktivists. Maybe I did know that, but in any case I had obviously forgotten it, despite actually having known the bloke since roughly the time when he was doing this mag. Good stuff anyway.
Last time I posted one of these, I scanned the magazine and included it with the download. I couldn't be bothered this time, having noticed that issue three includes a big fat helping of Misery and Purity, a thoroughly clownish treatise on Death in June by Robert Forbes, also author of The White Nationalist Skinhead Movement: UK & USA, 1979 - 1993, and For Europe: The French Volunteers of the Waffen-SS, although obviously those are entirely different books sharing no thematic common ground with the aforementioned ode to Dougie, so I'm not even sure why I mentioned them. For Europe: The French Volunteers of the Waffen-SS is apparently great according to all the five star reviews on Amazon. It's a well written history of the people who tried to help stop communism according to one bloke, so that's nice. Going back to Impulse 3, there's also an interview with Somewhere in Europe about whom I've never been entirely convinced, plus they have a crap name; so sorry - better things to do with my scanner. If it's any consolation, by not scanning and sharing the thing I am at least helping to preserve the current value of the mag for those investors and shareholders lucky enough to have secured a copy as part of their portfolio. Long live the market.


Download the eight tracks and cover by clicking on this link.


Return to Index
Posted by Lawrence Burton at 13:09