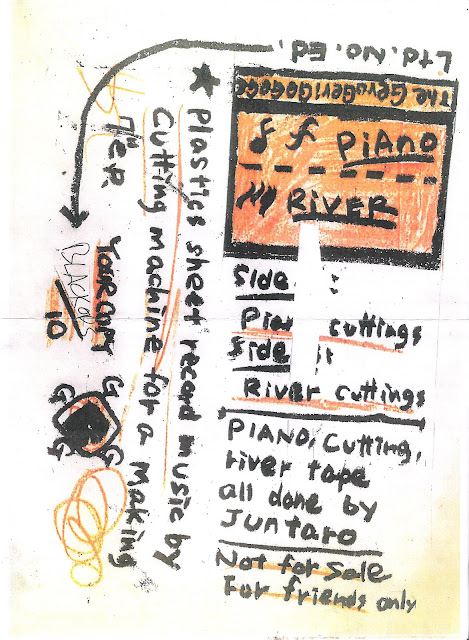 About this time last year I ordered a Smell & Quim album from someone I'm not going to incriminate by identifying (because describing what someone actually did apparently now counts as 'saying nasty things' about them in the noise twat microcosm), and who took a full eight months to send me the thing for reasons described in a series of increasingly lame excuses; but happily, he actually did eventually get off his fat ass and send me the record along with a bunch of freebie tapes. I hadn't asked for the tapes. He'd promised to chuck them in the package as compensation for the delay, even though it still took another six fucking months for said package to make it to the local post office. I didn't really want the tapes. I just wanted the record I'd paid for before I died of old age, but never mind.
Anyway, the Smell & Quim album was great - actually just about worth the wait. The tapes were of the usual kind which seem to do the rounds in noise circles - a crap plastic wallet containing a loose cassette and usually a photocopy of someone's knob, the equivalent of some postmodern wanker picking an empty crisp packet out of his bin, screwing it into a ball, and chucking it at you with the words, 'here - this is art. You can have it if you like.' Some might suggest such packaging strikes against the hegemony of boringly conventional cassette cases, but it always looks like they just couldn't be arsed to me - same as when I hear the words this is art in reference to anything which patently isn't. Make some fucking effort, dude.
To get to the point, now that I'm good and ready to do so, one of the tapes turned out to be this thing. I've never been particularly drawn to the whole Japanese noise thing, and the only legitimate reasons for anyone ever doing a poo on stage in front of the audience are 1) in the event of the venue lacking adequate restroom facilities, or 2) if you're playing support to the Electric Light Orchestra. Still, I'd at least heard of the Gerogerigegege so I gave it a listen, and as it turns out Piano River is not at all what I expected and is, in fact, pretty good. I couldn't really work out how he generated this noise, but presumably it's something involving turntables. Discogs breaks each side up into five pieces, which I've ignored because each sounds like a single work in five movements to me, just like you get with Beethoven and all of those guys. I assume this is the unofficial version issued by Michael Gillham, although given all the networking, I'd be surprised as to whether it was unofficial in the sense of Sting's I Hope the Russians Love Me Too triple vinyl bootleg (1986). Presumably being the unofficial version, I don't know if the sound quality has suffered. It seems a bit hissy, but then it still sounds pretty good to my ears.
Download the tape and cover by clicking on this link. 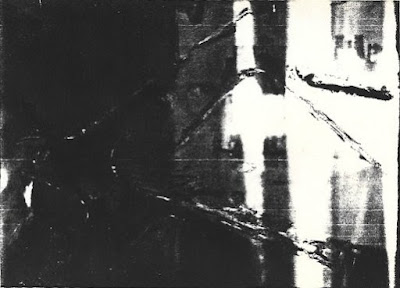 I've never been entirely keen on the idea of split tapes, but I suppose it depends on who is involved, and Forced Cohesion has some justification for billing itself as neither entirely the work of Illusion of Safety nor Runzelstirn and However You Spell It. Dan Burke and Rudolf Eb.er are amongst those involved and it does its job very well, but you're probably best figuring out where one artist ends and the other begins for yourself.
Unfortunately this will be the last of the material kindly shared with me by Richard of Chainsaw Cassettes (there were a few other things but mostly already out there and I didn't want to go stepping on any toes), so I'm not sure what you'll find here this time next week, if anything. I have a few things I intend to digitise, seeing as I've had my tape deck repaired, so there will be more at some point.
Click on this link to download.

Posted by Lawrence Burton at 11:03 No comments:

It's Sunday morning and I was going to write out the sales pitch and post the links for the Forced Cohesion cassette, having not found time to do so on Friday afternoon as has been my habit; but as I'm multitasking, combining the composition of this blog post with listening to next week's tape in the name of quality control, I find I can't remember much about the Forced Cohesion tape thus leaving me with little to say on the subject, and I can't help but notice that next week's TAC recording rocks like a bitch. So fuck it - here's next week's tape one week early in the name of mixing it up, wacky spontaneity, not having a clue what we'll do next because that's how crazy we are etc. etc.
As previously stated, I'm barely familiar with the work of Mr. Cox, who trades as TAC, but this one is fucking great - powerfully moody and atmospheric without committing anything too obvious to the general composition. Pierre Schaeffer probably wouldn't have been proud because he was apparently a miserable bugger who regarded his own work as basic experiments rather than ends in themselves, but he fucking should have been, the grumpy old bugger. I've probably said this before, but over the years I've heard so many pitiful efforts akin to some twat rattling a screwdriver around in a kettle for ninety minutes and calling it - ugh - sound art that I sometimes find it kind of difficult to get excited about yet another lengthy recording of someone I probably wouldn't want to meet chucking pebbles at a bike; but TAC is definitely one of the people who not only keeps this sort of abstraction interesting, but genuinely makes a number of the others redundant. In my opinion.
By the way, I haven't bothered splitting it into side one and side two because it didn't seem to need it.
Download the tape by clicking on this link. 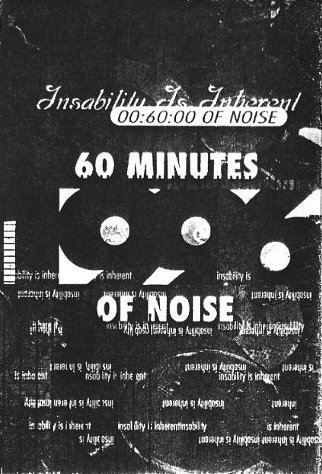 I really have no fucking idea. I can't even find this one on the internet, and I've never heard of any of them aside from Macronympha and TAC. The title is reasonably descriptive, meaning that most of the contributions are about a minute long, some a little more, some a little less, so the whole is fairly disorientating, although on the positive side, the sheer numbers mean you will almost certainly find something which tickles your ear in an interesting way.

As usual, I did my best to divide everything up into individual tracks, although I suspect you're supposed to listen to the tape as a single bewildering piece. Due to the nature of certain offerings, this involved a certain degree of guesswork so I may have wrongly attributed a few of them towards the end of the second side, but who knows.

Download the fifty fucking million tracks and cover by clicking on this link.

Posted by Lawrence Burton at 11:57 No comments: 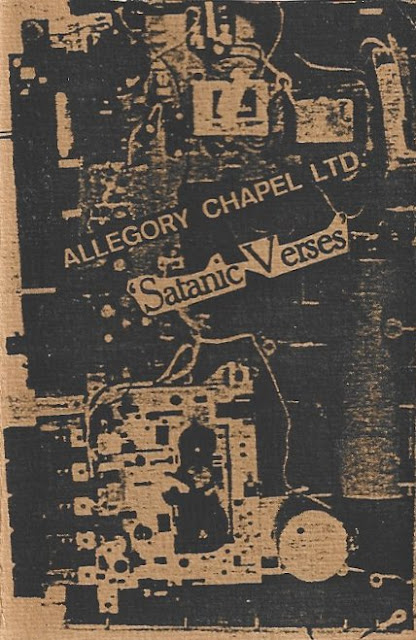 Here's another one I'd never heard of and don't know anything about. Sorry. I'm therefore left with just the stuff that popped out of Richard's zip file to go on, which this week, is distinctly meaty and flavoursome, if you'll pardon the simile. Online investigation seems to suggest this was an early, more primitive effort from whichever man of the cloth occupied the pulpit of this parish, and there even seems to be some sneering in that direction; to which I say, bollocks. It sounds pretty fucking good to me and I've sat through a hell of a lot of this sort of thing, which is no idle claim given that I'm now ancient and should probably be listening to Sing Something Simple on Wireless 2. There's plenty of looping here, plenty of layered noise, and also plenty of other details you might not anticipate from something trading as Satanic Verses. Some bloke on Discogs called it death industrial, which seems fair and is less annoying (at least to me) than dark ambient. This also seems to be the one which was never reissued in any form, at least not that I've been able to track down, possibly being an earlier, more primitive effort - as already reported - but personally, I'd be proud of this one had I been involved. Definitely more powerful than watching Damien Hirst flushing his wallet down the bog.
Attentive readers may note that I've welded Trip Again (intro) from the end of side one and Trip Again, which takes up all of the second side, together into a single track. It just seemed to make more sense that way.
Download the tape and cover by clicking on this link.

Posted by Lawrence Burton at 14:54 No comments: 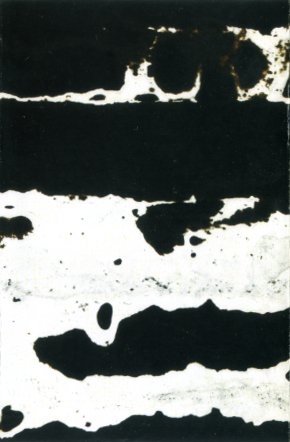 I know I always say I don't know nuffink about this bloke, but this time I really don't know nuffink about this bloke. I gather that he may be Canadian, although admittedly I'm basing that entirely on mailing addresses for two of the labels which have issued his work. Poking around a bit, I notice that Untitled, an earlier release, can presently be found on Apple Music, Spotify, and Soundcloud; and there's a collaborative album on Bandcamp if that's of interest to any of you. The music, as you will hear if you download this thing, is something in the general vicinity of ambient drone, or possibly droning ambient, a genre I enjoy, but about which I struggle to find anything to say beyond whether I like it or not. For what it may be worth, I like this, and partially because it reminds me of recordings made by the late, great Andrew Cox, so please feel free to take that as a recommendation.

Posted by Lawrence Burton at 15:56 No comments: 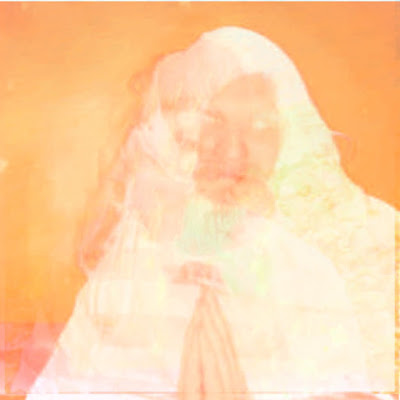 The cover, although informative, isn't visually arresting so the above is a picture of all four persons involved superimposed over one another, somehow amounting to Stewart Walden and a few blurry wisps, which represents the music only poorly but at least gives you something to look at.

The four persons were Neil Campbell, Richard Youngs, Simon Wickham-Smith, and Stewart Walden. Neil Campbell you may remember from ESP Kinetic, SWANC (with Stewart Walden), Vibracathedral Orchestra and others, the first two of which are represented by adjacent material right here, if you would be so good to have a look in the index as linked at the foot of this page. Richard Youngs was something to do with Omming for Woks, whom I remember from somewhere or other, and all of them have been in the A Band at one point or another.

Durian Durian seems to result from all four of them recording sounds entirely independent of each other, with the whole lot then mixed together - simultaneous playback, so I gather - resulting in this tape. Anything involving Neil Campbell is usually worth a listen, and this one is no exception.

Posted by Lawrence Burton at 13:42 No comments: