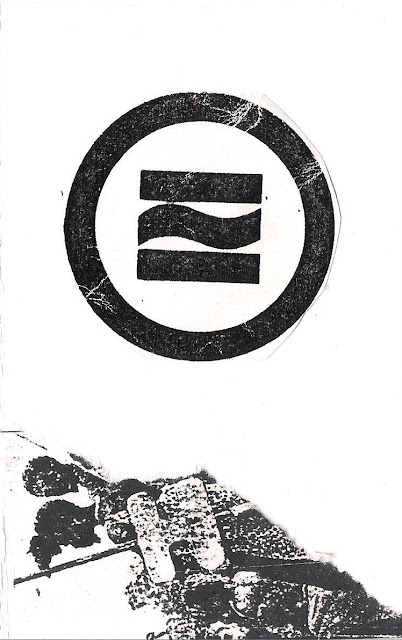 Neil Campbell sent me Mission, the ESP Kinetic live album on one side of a C90 with a whole load of other stuff on the other side. I've digitised it, but I'm still engaged in the detective work of trying to deduce what the extra tracks are called, so while we're all waiting, here's something else from the same stable. This was a C15 Neil sent me featuring tracks for what would have been my third Do Easy compilation tape. I was going to use Metropoline and the tape would have been called Avanti!, but it never happened and I don't even remember why. I've a feeling I may have given the master to one of the contributors - possibly John Jasper - so he could record his thing directly onto the tape, and I never got it back.

Anyway, this is quite a nice little tape in itself, dating from what I imagine must have been near the end of ESP Kinetic's existence as a band, and which I still think would have made a great 12", but for the fact that no-one would have bought it because they'd spunked away all their pocket money on another unlistenable live Psychic TV album. There's nought so conservative as the avant-garde. Speaking of which, in case I never mentioned it before, I saw ESP Kinetic as one of those bands who sounded how Psychic TV should have sounded but didn't due to the Porridge effect - sharing certain interests with the noise weirdies but not scared of a tune or occasionally sounding happy. 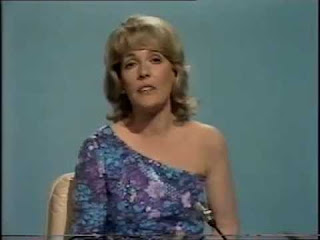 Finally, Esther - I should probably mention that this is a tape Neil sent directly to me, presumably a one off with a handmade sleeve - bits of photocopies glued to the front and the track list written in biro. Therefore if you see this tape for sale on eBay, sold by some bloke in Bulgaria mumbling something about how he recorded it off the radio, and if he's selling it for forty bucks, and if you buy it for forty bucks, then that's your tough shit. I mention this only as the fucking clown in question is flogging an old Opera for Infantry tape for about the same, having downloaded it from this blog; and I know this because when I digitised the tape, it came with no track listing so I had to listen to the thing and come up with names for the tracks based on Trev's vocal - and those same titles appear on his expensive collector's item, hopeless wanker.

If this is yourself reading this, oh eBay retailer of my downloads, get a fucking job.

Return to Index
Posted by Lawrence Burton at 12:23 No comments: 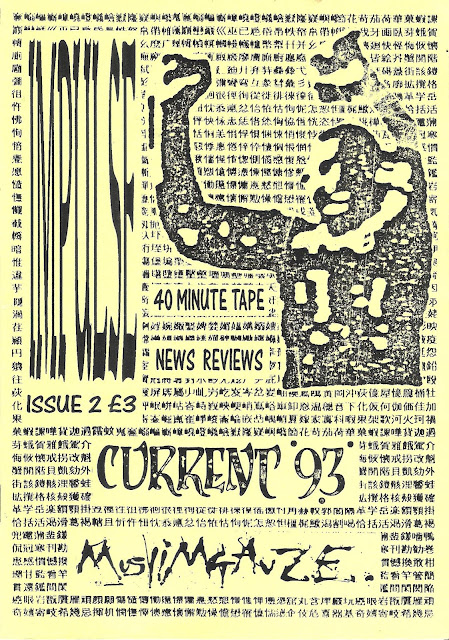 Impulse was an A5 mag produced by Mark of Konstruktivists, Binary, Codex Empire, and others I probably never heard of. Each issue came with a compilation cassette of (what I'm pretty sure was) all new material by many of your weirdy faves, which is why it's here. I missed the first issue, in case anyone was wondering, but here's the second with forty minutes of very listenable stuff.
You should have heard of Nagamatzu, I would think, so I doubt they require introduction, although for what it's worth this is one of my favourite tracks by them. Antonym have already turned up on this blog. Nova State Conspiracy were something to do with Alex Novak of Venus Fly Trap, Attrition, and others. I don't know much about any of the others, and I wish I knew more about Whiteslug as their track is fucking great. The collection has a bit of a whiff of combat boots about it, but mostly it's done well, and certainly better than a lot of those village hall scout hut versions of Front 242 which were around at the time.
I've scanned the mag, so that's also included in the download as a series of jpegs in a separate folder. Where tapes came with booklets, I usually include them as scans, and this is sort of the same deal, I guess. You can see who features in the mag by looking at the picture above. I haven't had time to re-read the thing so take no responsibility for any claims of simply exploring controversial ideas and imagery made therein, but it is, if nothing else, a labour of love and really well put together.

More of these to come when I get around to it.


Download the ten tracks, cover and magazine by clicking on this link.

Return to Index
Posted by Lawrence Burton at 13:16 1 comment: 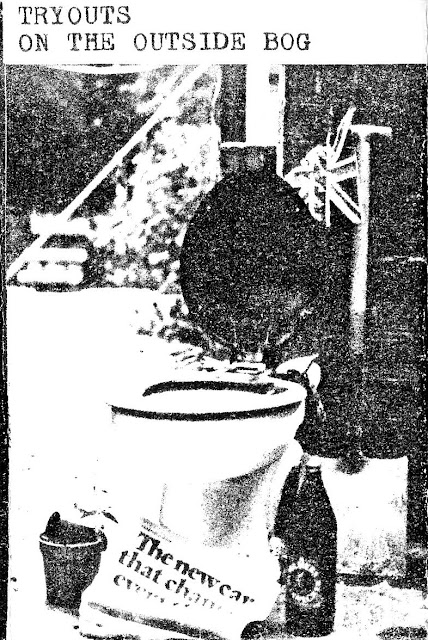 I'm not sure why it's taken me a full year to post this second Tryouts tape, but better late than never. You'll possibly remember them from last September when I posted the first tape, except as I've found Jon Sykes' letters in the meantime, I realise the first tape I heard was actually their third, and this is their fourth.

Tryouts' fifteen seconds of fame came when The Look on Their Faces was mentioned in Sounds, wherein it was written...

At a time when Cassette Pets seems full of either grim dabblers or brainless would-be pop stars it comes as almost refreshing to be confronted by the Tryouts' complete daftness (and they don't even try to turn this natural trait into a selling point). On their new tape, The Look on Their Faces, they occasionally slip into vulgarity - He Wears Underpants (titter) and Sitting on the Bog (giggles) - but are able to redeem themselves with the splendid minimalist pop of Damn Her.


Anyway, what I can piece together of the whole story is that Tryouts comprised Jon Sykes, Rob Blackburn, Grant Hodgson, and Chris Hugill - although I believe this last guy left before they recorded On the Outside Bog. The Look on Their Faces was their first cassette to feature real musical instruments. Previously we used pots and pans and all that stuff, as Jon wrote in one of his letters, in which we also find...

Jon Sykes' Brain is in the Lost Property Office (April 1981) C90 - 29 copies sold as of February 1984. No musical ability, all pots and pans and stuff. Nothing like the next cassette.
Rigamortis - never released. It was that rubbish, we put it in the bin!
The Look on Their Faces (1982) C30 - 20 copies sold as of February 1984.
On the Outside Bog (December 1983) C30 - 18 copies sold as of February 1984.
In Front of a Crowd (August 1984) C30 - a proposed recording of our first ever live performance at Staxton Village Hall in the not too distant future. All the songs except one will not have been released before. Jon gives the date 20/8/84 for the performance. The next letter states Tryouts have had an up and down career since I last wrote. We did a successful gig at a place near Whitby and at the Totley site of the Sheffield City Polytechnic. The Whitby gig was released as our fourth cassette album. It's quite good. However at Easter we played at the same place near Whitby again. This time the crowd was awful. Only a handful of people enjoyed our set, but the rest sat there with depressed faces longing for us to get off. Anyhow they got some abuse thrown at them by yours truly. The thing that really annoyed me was that those people never even gave us a chance. They had already made their minds up that we were shit.

So there you go. They sent me this C30 on side one of a C60 with a couple of extra tracks on the other side, both of which I used on a Do Easy compilation, and those are also included here. Funnily enough, I've only just now noticed that the album version of Superior Human Beings omits some disgruntled mumbling utilising the F-word. This stuff still surprises me. A lot of it is like the most awful teenage poetry set to music, and yet it has a sort of disarmingly awkward honesty which you just never got with the likes of Morrissey or any of those other studiously dispossessed types, habitually moaning about loneliness whilst posing on the front cover of some shitty music rag, week after week after week.

Wherever you are now, Tryouts, I raise my glass to you.

Return to Index
Posted by Lawrence Burton at 12:32 No comments: