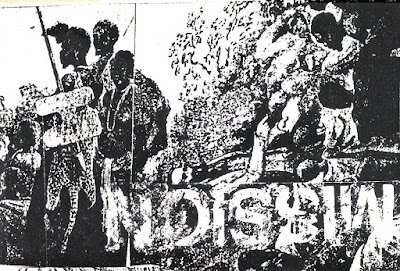 This was ESP Kinetic's live album. I get the impression they performed quite a bit, and whilst rummaging around in the reliquary in which I store Neil's correspondence - along with mail from Cosey Fanni Tutti, Peter Bagge, Chris Claremont, Billy Childish and my other famous pals* from this crazy world of showbiz - I found a poster for one of ESP Kinetic's gigs, and not even one which is represented on this tape; so I've scanned that and you'll find it in the download.

This one was a bit awkward when it came to digitisation, seeing as the track list given on the cover refers only to the venues and dates at which these performances were recorded, which were as follows:

The problem for me was that I couldn't work out where one section ended and another started, so instead I've divided it up into the actual songs, where I've been able to recognise them.

Additionally, Mission was originally a C45, from what I can tell. Neil sent it to me on a C90 with a load of other stuff on the b-side, apparently from a Finnish release called Fleck- Nor, but again with no actual list of what the tracks were called. Some I already knew, and some I was able to work out by comparison with a 2008 CDR issue of Fleck-Nor; but I gather the 2008 Fleck-Nor may have been different to the one Neil mentioned as I was still left with three tracks I couldn't identify. So tracks one to fourteen are Mission, and the rest are seemingly from a version of Fleck-Nor other than the Music Mundane release, a few of which still seem to be relatively cheap on Discogs if anyone is interested.

By the way, as a point of interest, the Black Lion, at which some of the live tracks were performed, features in Alan Moore's fifty-million page novel Jerusalem, which unfortunately isn't very good in case you were wondering.

*: You probably haven't heard of some of these people, but I have.


Download the twenty-four tracks, cover and poster by clicking on this link.

Return to Index
Posted by Lawrence Burton at 15:46