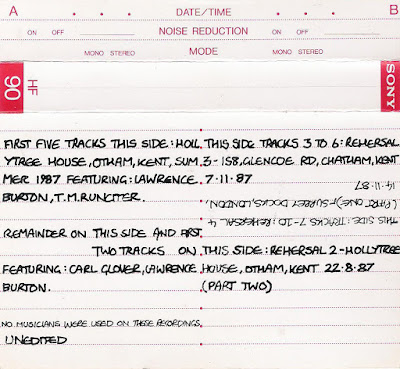 Here's another one of negligible interest to everybody except those who were actually in the band at the time, namely me and Carl, and it's not even like either of us will be playing this shit on a daily basis; but nevertheless, here it is, should you require it.

The first five tracks are obviously just me pissing about with my Casio SK1 whilst watching Eastenders - note backing vocals by Nick Cotton. The rest is Carl and myself rehearsing, jamming, or whatever the hell you want to call it at Hollytree House in Otham, then at the place I moved to in Glencoe Road in Chatham, and finally at Carl's place in Bermondsey at various times during 1987. I can't be arsed to work out what belongs to which rehearsal and where, or how the previous tape segues into this one, but it probably doesn't matter and an inlay card's worth of notes are included in the download if you care enough to work it out.

For what it may be worth, the arbitrarily named Ghost in My Kilt - end of side one, beginning of side two on the cassette - is here welded into a single track because it seemed to make marginally more sense that way. Also, if you're downloading this out of curiosity due to the presence of two apparent covers of a Slade song, personally I wouldn't bother. That said, most of side two sounds decent to me, thanks in part to Carl having picked up a drum machine which sounds pretty decent recorded through a speaker and over a crappy condenser microphone, and in part to the songs beginning to emerge as songs rather than vaguely repetitive interludes during longer periods of wibbling and general fucking about. Well, that said, it all sounds fine to me, but then it would, wouldn't it?

Return to Index
Posted by Lawrence Burton at 09:42 No comments: 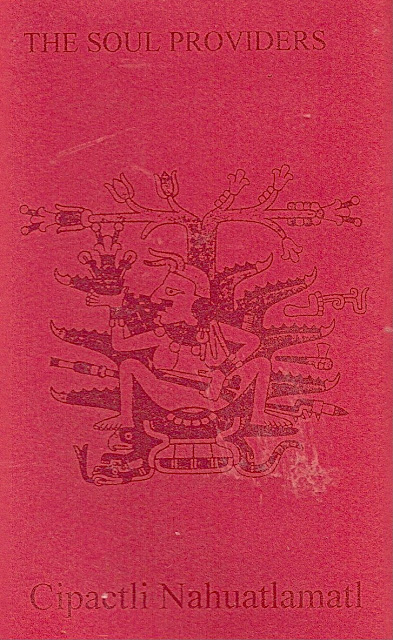 I first met Ed Pinsent through comic books and his involvement with Fast Fiction, then later came to know him a little better when I realised that we lived in roughly the same part of London and shared an interest in weirdy music, as expressed by Ed starting his own magazine and asking if I would like to contribute. The magazine was called The Sound Projector and still exists today in concert with an associated radio programme broadcast on Resonance FM, all of which should be investigated by following this link. Anyway, back in 1997, both Ed and myself were furrowing along related musical parallels. My crap is sporadically documented right here on this blog, whilst Ed recorded and performed with Attack Wave Pestrepeller (famously including Savage Pencil) and Mystery Dick - improvised and occasionally noisy outfits whose works on vinyl and compact disc are well worth the effort of hunting down should you feel so inclined. I vaguely recall Ed and myself recording together mainly because it seemed crazy not to, given certain shared musical interests, although it may also have been significant that Alan Mason's girlfriend had given me an electric piano and Ed was quite keen to have a go on it. The electric piano was free on the grounds of it being the size of a small car and that Alan's girlfriend had grown tired of carting it around with her each time she moved. The contacts could have done with a clean, and the thing was so huge that I ended up giving it away for the exact same reasons that the thing had come into my possession; but it had a good sound, so it was nice that Ed made such great use of the thing whilst it was around, not least because his tickling of ivories had a little more going for it than my characteristic one fingered Gary Numan tributes.

Anyway, the story behind these tracks beyond that which is already described above is that we set up every instrument or sound producing object we had at our disposal in my living room and just improvised, although the first three significantly shorter tracks were recorded by making stuff up along to an already improvised backing track bounced onto my tape deck. I was probably worrying about them sounding too sparse or something.

The titles and artwork were more or less arbitrary choices derived from my Mesoamerican fixation of the time, as was the name of our "group" - the Soul Providers, which I liked because it sounded more like some RnB thing than a bunch of noise merchants, and I was mostly listening to RnB at the time. I'm not sure what Ed ever thought of the names or my turning this stuff into tapes, although Soul Providers didn't make him frown quite so hard as had my first suggestion - Shinjuku District, which came from a Godzilla film and I now realise would have been a dreadful choice. I had the impression he was really mainly just interested in the music, the improvisation and so on; which is fair enough. Listening to this stuff nearly two decades later I realise I still enjoy it. It still sounds good to me - at least once you get over the terrible hiss generated by the recording process of the first three tracks. In fact, I'm actually sort of proud of this tape, which isn't something I can say about many of them.

Return to Index
Posted by Lawrence Burton at 09:31 2 comments: 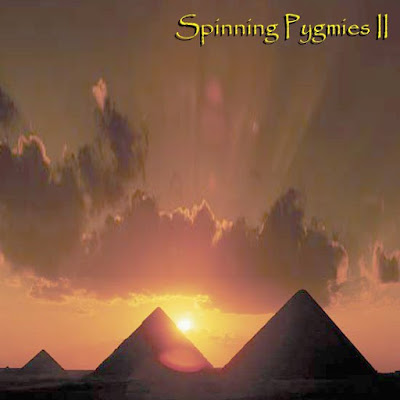 I've already told the full boring story in as much detail as anyone could possibly need, so I refer you to this previous blog entry in order to avoid repeating myself. This second tape featured our second and third rehearsals, such as they were, with a line up of Carl and myself augmented - if that's quite the right word - by Garreth Roberts, usually playing second guitar, and Mark Smith on sax depending who had bothered to turn up on time. Both sessions occurred at Hollytree House, Otham, Kent during the Spring of 1987, and actually most of this is the second rehearsal but for tracks ten to twelve as listed below, which comprise the third.

Preamble was recorded some time later by myself with a guitar and a Casio keyboard sat in front of a tape recorder, hence the distinct difference in quality. It's actually one of four tracks on the original cassette which I presume I recorded alone for the sake of filling up the tape, and one of these tracks mentions the Dovers - the group we became in the wake of Spinning Pygmies - so it must have been a bit later. I haven't included the rest of these solo tracks in the download because the other three are all just me impersonating Carl and singing about being gay and how I regularly entertain sailors in my flat and so on - this being an example of my retarded sense of humour. I would argue that the censored tracks are too inept and stupid to be mistaken for genuine homophobia, but listening back to them now makes me nevertheless uncomfortable mainly because they're shite even by my unambitious standards, and just not very funny.

Mind you, I'm not saying the rest of this is particularly amazing, but there are probably bits you could play to Wire reading arseholes as obscure Faust outtakes or something, especially the stuff with Mark playing sax.


Download the twelve tracks by clicking on this link.

Return to Index
Posted by Lawrence Burton at 09:54 No comments: 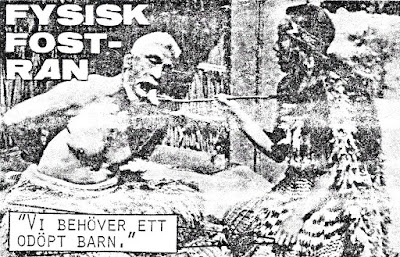 Return to Index
Posted by Lawrence Burton at 09:31 4 comments: