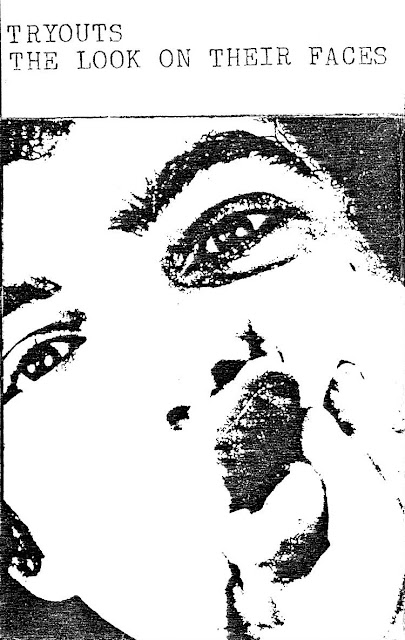 I always felt Tryouts should have achieved some sort of vaguely legendary status. I'd read about them in Sounds music paper (the clipping of which is reproduced on the cover of this cassette) even before they turned up on one of Larry Peterson's compilation tapes, and eventually on one of mine too. They had a synthesiser, a Casio VL1, a crap tape recorder, and that was about it, and their songs had puerile titles suggesting common ground with the sort of shite I myself had been recording for the previous couple of years.

Strangely, when the tape turned up in the post, they weren't quite as I expected. The toilet humour was merely an aspect of their work rather than an actual jihad, as it had been for the Pre-War Busconductors. They sounded a bit like someone in the group wouldn't have minded being in the Human League, but were let down by the pitiful circumstances of their recordings, and yet this shambolic quality was at the same time part of their charm. You could probably call it outsider art, or at least you could if you were a fucking tosser.

They were from Scarborough, and I don't know much else about them, and if I still have any of their letters, I can't find them; so just listen to the tape and feel the realness.


Return to Index
Posted by Lawrence Burton at 12:49 No comments: 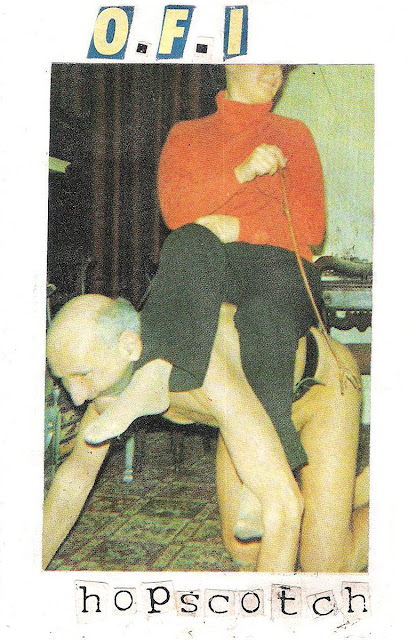 Opera for Industry were the first band to write to me and ask if I'd like to release their tape. I think they got my address from Colin of Family Patrol Group. The tape was called Hopscotch, and it was a bit rough, but nevertheless a fair bit more convincing than any of my own efforts in the same noisy direction, so naturally I said yes. Then they changed their name to Opera for Infantry as acknowledgement of their residence in Amesbury, Wiltshire, a town full of squaddies and camouflaged types; and then they started their own label and released a million tapes, including one of mine; and then they eventually became the Grey Wolves.

Just for the record, and seeing as this one has come up a few times, and I feel I'm in some sort of position to address it having known these people on and off for the last three decades, albeit at a distance - I always understood the whole point of the Grey Wolves to be protest mounted by means of a sort of sensory overload, bombarding the audience with horror upon horror to the point at which there is no choice but to react - which is more or less directly stated in their Cultural Terrorist Manifesto; and this is why they've been accused of extremist right-wing sympathies from time to time, because they've made use of imagery suggesting the same but, I would argue, towards entirely different ends to those from which such imagery has been appropriated. In other words, the point is to inspire a positive reaction against the authoritarian status quo not by educating you, as Crass might do, but by scaring the living shit out of you. Whether or not such tactics work or are at best badly misjudged is another thing entirely, but that's how I've always seen it.

Anyway, Hopscotch was their first album, so far as I'm aware and is fairly revealing as to where the lads were coming from. Confrontational electronics was kind of a new thing at the time, and those dabbling were still very much experimenting rather than just forming Whitehouse tribute bands, which came a bit later. To me, Hopscotch always sounded like it owed at least as much to Reality Asylum and the other, noisier works of Crass as it did to Gristle and the like, particularly Winds of Mauthausen.

Hopscotch is a racket, and a primitive racket amounting to two blokes with a Jen SX1000 and a ghetto blaster making a noise in a scout hut, the hard electronics equivalent of Link Wray or something, I suppose; but I'm surprised at how powerful it still sounds, all things considered.

I've cleaned it up as best as I can, editing out all the clicks and pops of turning the tape on and off with what sounds like a cheap Woolworths cassette in the deck. Also, three different inlay cards are included, a homemade version forged from swinging mags in which the initial cassette was presented to me for my consideration, a photocopied one which came with the master tape they sent once I said I'd like to release it, and the overly fussy fold out Do Easy tape cover.


Download the seven tracks and variant covers by clicking on this link.


Return to Index
Posted by Lawrence Burton at 12:02 2 comments: 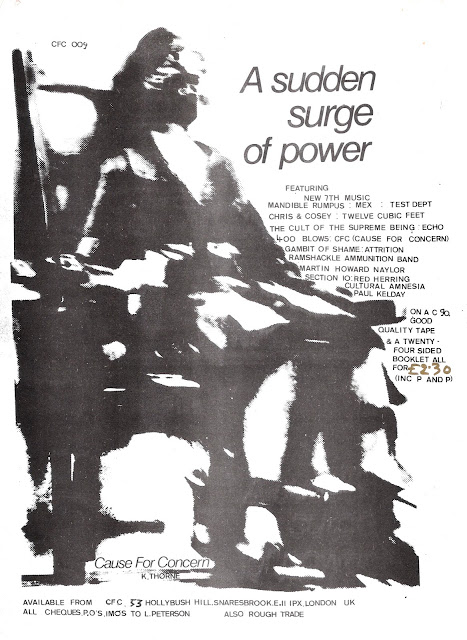 You may have noticed how I'm in the habit of apologising for the stuff I post here, occasionally even writing something amounting to I wouldn't bother if I were you; well, not today. A Sudden Surge of Power gets my vote for the greatest compilation tape of all time, and it's probably no exaggeration to say this thing changed my life when I first heard it. This collection tipped me off to a lot of stuff without which my life would have been significantly poorer, and of the eighteen individual contributing artists, there remain just eight whose work I never subsequently hunted down on vinyl or on other tapes. Fuck - I even ended up knowing a few of these people as friends. Third Mind's Red Sand is the one which always seems to get the publicity, and which is fondly remembered by industrial music historians who weren't actually fucking there; and Red Sand is great, and yes, I would never have bothered checking out DDAA were it not for that tape, but Sudden Surge was the one you actually listened to for pleasure because it was such a fantastic and varied assemblage of the weird and wonderful with a good few of those Wild Planet big names we were all gagging to hear.


The tape came with a highly informative 24-page A5 booklet with contributions from everyone involved, which I've scanned and included in the download along with cover, flyer, and a CFC tapes catalogue of the time.


Download the twenty-five tracks, cover and booklet by clicking on this link.

Return to Index
Posted by Lawrence Burton at 13:06 4 comments: 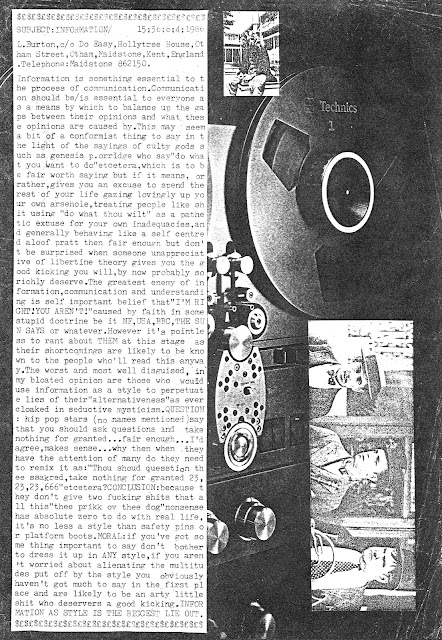 I should have taken my own advice and kept my mouth shut for the duration, but never mind. This was almost the last tape I recorded as Do Easy, mostly recorded in the college sound studio on a four-track TEAC, and thirty or so years later, I'd say it sounds mostly decent providing you don't pay too much attention to the words. I was young. I wasn't very happy. I hadn't had sexual intercourse in well over a year. I looked funny and people kept calling me names as a result. Musically speaking, this was mostly me, although Information through to Animation of Life, and also Down in the Echo were collaborations with Garreth Roberts, so that's mostly him singing or speaking on those; Steve McGarrigle also contributed in some way to In One Day and the remix of This Can't Go On Forever; and the sonic dog's dinner which was Sound Levels in Arabia additionally features Paul Fallon (who was also in the Spinning Pygmies with Garreth and myself for about forty seconds) and some bloke called Matt, about whom I don't remember very much at all.

Information was recorded as the soundtrack to a video piece, as us artists call them. The video comprised stills of drawings by Dennis Nilsen, and Garreth is reading out poems written by the same on the soundtrack, as you can hear. The point was that the material is only identified as having been the work of Nilsen at the end of the video, so everybody goes ooh! and agrees how playful and subversive it all is blah blah blah audience expectations blah blah blah. The drum machine pattern on Sound Levels in Arabia was originally written for the only song I wrote for Envy, which mercifully we never recorded because it was shite. Caroline A was me deciding I wanted to be the Jesus & Mary Chain and to record a proper pop song with a video of an actual band playing it, and I was going to give copies of this demo to my loyal recruits so they could learn how to perform my masterpiece, but luckily I lost interest and never got around to it. HSC was recorded after hanging around with TD and is pretty much an inferior rip-off of a track he recorded as Frenzied Encounters, which I've yet to digitise.

...and no, I never got around to a formal release of this one either, so no fancy cover I'm afraid.


Download these twelve track by clicking on this link, if you must.

Return to Index
Posted by Lawrence Burton at 11:45 2 comments: