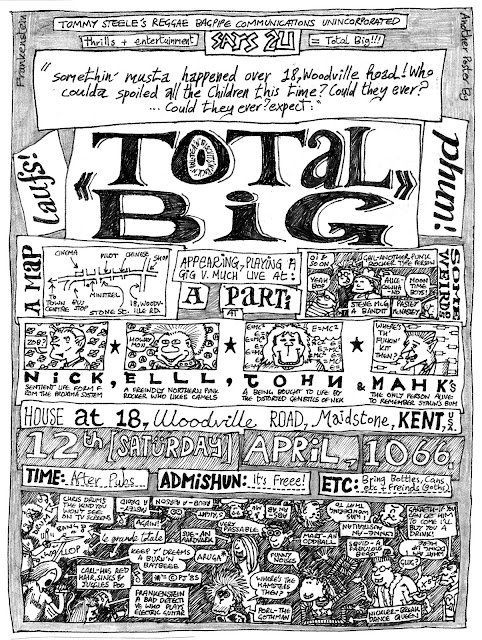 Total Big should require no introduction providing you've read (or even downloaded and listened to) this, or even this. If on the other hand it seems like maybe they (or I suppose we) do need an introduction, then click on either or both of those words highlighted in orange in the previous sentence.

Here's another ninety minutes as compiled by Chris, our drummer. Both rehearsals were in the kitchen of Hollytree House in Otham, Kent. The first thirteen songs (comprising side one of the cassette) date to Saturday the 7th of December, 1985, and the rest are from the following weekend, the 14th of December. This was the first stuff recorded since our debut gig on Wednesday the 27th of November at the art college as part of an all-night work-in held in protest of education cuts. The gig was short and noisy but fun seeing as we only had two and a half numbers worked out (Rock Sandwich, He Writes the Songs, and Ouch!!!), and it is acknowledged in my diary as follows:

It was the work-in today. Carl and Chris turned up in the evening, and Jude Hibbert back-combed my hair for me. The Submarines played, followed by He's Dead, Jim who were Pete Avery, Jel, Rob Coolen, and some guy from the painting department. Total Big played to a half empty canteen. We showed some TBM videos to a bunch of hyper-enthusiastic art foundation course guys and gals. I watched Saturday Night & Sunday Morning in the lecture theatre.

I've a feeling one or more of the new songs on this tape may have been developed from stuff improvised at the gig, probably Are You My Mother? and Call It What You Want, although I could be mistaken. This tape also includes Carl pissing around on Chris's synthesiser and use of some sort of echo effect meaning the whole bears a much stronger resemblance to the work of Emerson, Lake & Palmer than the previous tape. Whilst obviously I'm biased, I find this one quite listenable in places, particularly Armchair Maniac and the formative thrashy version of Keep Your Dreams A'Burnin'.

The cover is just yer bog standard inlay card which I couldnae be arsed to scan, and the poster above refers to a later gig at someone's house in 1986.


Download the twenty six songs by clicking on this link.

Return to Index
Posted by Lawrence Burton at 10:04 No comments: 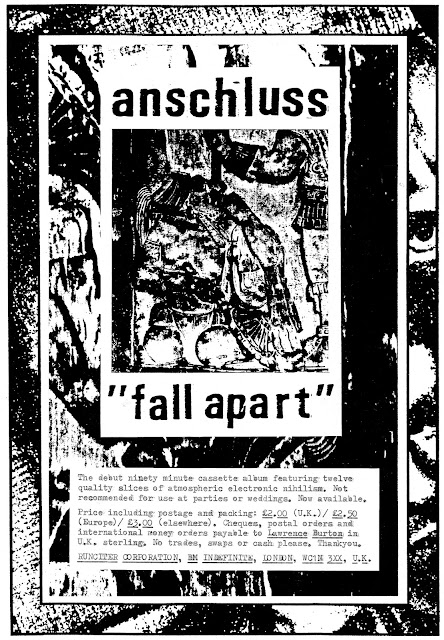 At some point during 1992 I had a conversation with Paul Condon which yielded the sort of relentless belly laughter which begins to hurt after a couple of hours, and the resolution to record a tape of deliberately bad power electronics complete with Hitler's speeches and amusingly portentous titles, mainly because that stuff is piss easy. I started on some tracks, but found that I liked them too much to take them further into the realms of sarcasm; and Paul and I eventually recorded a C15 as 621 Monosodium 621 along related lines - roughly speaking our version of what Current 93 would have been had they been influenced less by Mr. Crowley and more by a love of potato crisps. One track features Hitler's speeches and amplified recordings of us eating Wotsits, Wheaties, and other snack foods whilst trying hard not to laugh, which sort of got it out of our system.

Meanwhile I still had this material, which became something else entirely. I chose the name Anschluss because it sounded austere and slightly menacing. It means union in German, or something along those lines. I later realised it historically refers to some political event relating to the Nazi occupation of Austria. I didn't know this at the time, but had I done, I doubtless would have been quite pleased, being a bit of a knob and all - simply exploring controversial ideas and imagery blah blah blah... The significance of the term union was a vague nod to this music being a sort of collaboration between myself and John Powell of Hoax! fanzine. Every few months he sent me tapes of music he had done, and I could never quite work out what I was expected to do with them, so I ended up sampling a lot of it and using those samples to create about half of the sounds you hear on this tape; so it was a union of sorts, albeit a bit of an unequal one, mainly because I liked the thought of having recorded a tape which wasn't just all me for a change. In addition to this, I was probably clinically depressed, or at least a significantly unhappy bunny, and I was listening to quite a lot of Swans and Death In June - although the influence of the latter thankfully shows only in the borrowed title and, I suppose, the guitar on Deny Everything.

It all sounds a bit absurd to me now, although I still think it's a decent tape for what it is, and it seems an accurate encapsulation of my state of mind at the time. Shortly after I recorded it, I got a girlfriend and managed to cheer the fuck up a little bit, so I never got around to actually selling copies of the thing. In fact, I'm not even sure I did a cover, or if I did, I have no idea what happened to it, so there's just this advertisement I knocked up a couple of years later which never appeared in anything.

Enjoy, but be warned, it's a bit droney.


Download the twelve slices of unremitting misery by clicking on this link.

Return to Index
Posted by Lawrence Burton at 10:47 No comments: 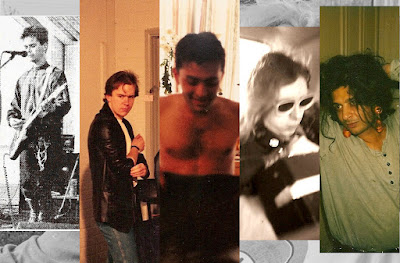 I wrote a bit about Envy here, and if you've been following this blog you may be familiar with Apricot Brigade, their earlier and probably slightly better incarnation. I wasn't actually aware of being in possession of any recordings of Envy until I was looking through a couple of compilation tapes of all sorts of shit and noticed I had this, which was nice as I thought nothing had endured from my brief couple of months of pressing buttons in this band. It isn't actually a C46 so much as one side of a C90 also featuring some crap I recorded in Wales on an art college field trip and er... FLM by Mel & Kim taped off the wireless (and which is surprisingly better than I remembered it being) - but a fair few of the tapes I've slapped on this blog are listed as C46, C90 or whatever mainly so as to indicate duration rather than to attribute origin. Sometimes the material doesn't even all come from the same tape, but listing them as a C60 or similar just seems tidier (and besides, who cares?)

Anyway, tracks one through to sixteen comprise a rehearsal conducted around Andy's house at some point during the summer of 1986, most likely August; and the title My Sorrow is just a guess as I have no memory of the song or what it was called. I could have edited out all of the pissing about and false starts, but I didn't want to so if you want just the songs themselves shorn of mysterious silences and Rajun noodling about on his guitar, just delete anything which isn't actually a song once you've downloaded it. Unfortunately the tape upon which I recorded this stuff was kind of fucked and a bit stretchy in places. I've done what I could to clean it up, and I think it's listenable, but it should probably be noted that any tremelo effects you can hear weren't our doing.

After I was chucked out of Envy, Andy was replaced by Rajun's brother, Prez, and this line up recorded a fantastic five track demo tape in 1987, produced by Tim Beeby and Dave of DTS Studios (it says here on the cover). I was going to supplement the rehearsal tracks with the five later studio recordings but by ridiculous coincidence, that tape is also fucked. I managed to digitise A Suicide but the other four sounded like they'd been drinking cough syrup; which is a pisser, but I suppose at least I rescued A Suicide, which is nice because I honestly think it's a work of art, easily the best thing this band ever wrote.

Download the eight songs and related fucking about by clicking on this link.

Return to Index
Posted by Lawrence Burton at 10:44 No comments: 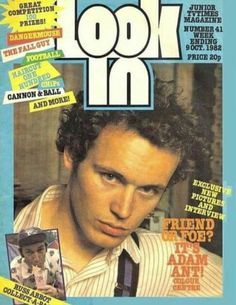 Return to Index
Posted by Lawrence Burton at 10:02 1 comment: