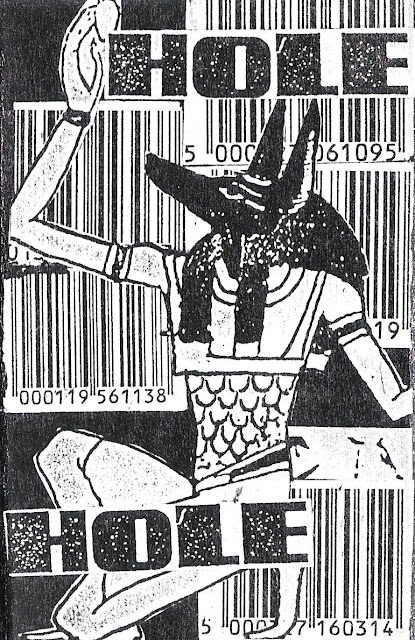 This came on one side of a C60, one of about a million random tapes which fell out of a Jiffy bag sent by the gentleman behind Hoax! magazine back in the nineties. I knew nothing of Hole, and still don't, beyond that this version was nothing to do with Courtney Love and may even have predated her use of the name, and that it was something to do with John Everall.
I don't actually know much about John Everall beyond that he used to write for Empty Quarter, recorded Mesmeric Enabling Device with Nigel Ayers and Mick Harris, and is sadly no longer with us. Discogs describes him as a techno artist*, and I suppose this sort of qualifies, although the first thought I had when I first heard it was that it reminded me of Viral Shedding era Nocturnal Emissions - which is a good thing because that's one of my favourite records of all time. Given Everall's later association with Nigel I would be surprised if Nocturnal Emissions hadn't been something of an influence.
Anyway, it's a live tape complete with hiss, crowd noise, and even a bit of wow and flutter at the beginning, and yet the quality of the music somehow shines through the limitations of how it was recorded; which is why this one at least didn't just get taped over.
No idea what the individual tracks were called so I've listed them numerically, I-V. He had a couple of records out as Hole, but with different tracks to whatever we have here so far as I can tell (this conclusion based on seeing what's on YouTube rather than actual ownership of the aforementioned records).

*: It doesn't although I'm sure I read that somewhere.


Return to Index
Posted by Lawrence Burton at 13:24