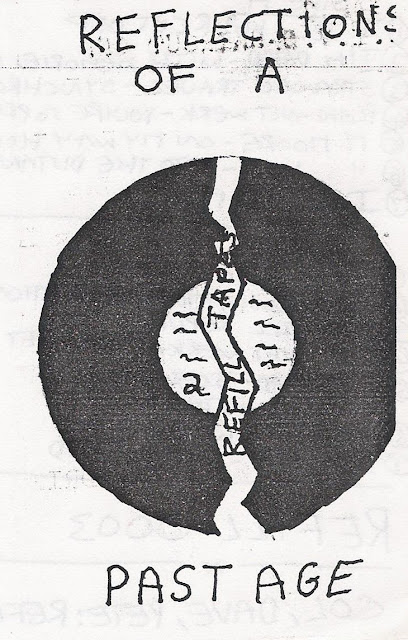 I'm Dead was Keith Goldhanger, later of Headbutt, and IVE released a very fine full length tape through Refill (which will probably turn up here when I get around to it), but otherwise I'm in the dark about most of this lot, at least beyond what was written in the booklet that came with the cassette. Refill were a small operation based in Devizes, Wiltshire whom I knew through Trev Ward and Anal Probe, or possibly the other way around. I say small in reference to the extent of their legend and how little it seems to loom here in 2017, which is a shame, because Refill was actually run by three people (as opposed to the usual one bloke in his bedroom, like me) who used to write nice letters, full of enthusiasm despite a somewhat dour outlook when it came to the possibility of anyone ever buying their tapes, presumably outside of Trev and myself. They didn't make much of a dent in the polls at that year's design awards, but they released three decent tapes - two compilations and the aforementioned That Infernal Chemistry by IVE; and technical considerations aside, they did a pretty good job.

I've edited the tape, as is my custom, so as to remove bewilderingly lengthy fifteen second gaps between songs and to round off some of the harsher edits and clicks, but some of this is kind of low-fi so there was a limit to what I could set straight - notably the wow and flutter you may notice on Haircut Off, which I've a feeling may have been on the master tape, possibly even on the original.

There - that's about all I can tell you, which by happy coincidence is probably about all you need to know. I played this one a lot back in the day and there's not a duff track on there - even the token helping of cod reggae is good. Turn this one up until it rattles the windows.

Download the fifteen tracks, cover and three-page booklet by clicking on this link.

Return to Index
Posted by Lawrence Burton at 11:30