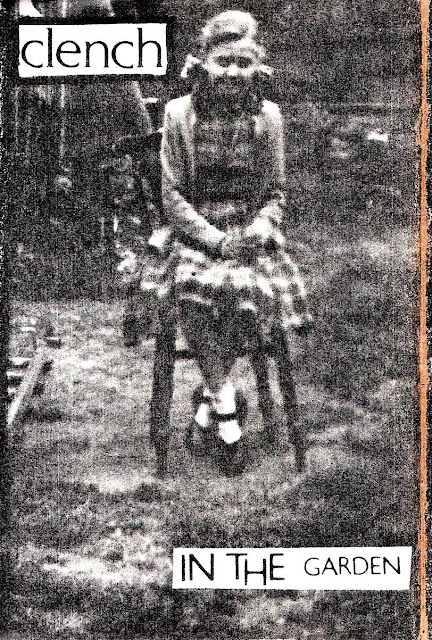 I'm afraid I don't have much of a clue about this one, and even the year of its appearance is guesswork based on where the catalogue number should appear amongst other Black Dwarf releases listed on Discogs, which this one isn't, for some reason. Black Dwarf was the label run by Tim Gane of the Unkommuniti (and yes - Stereolab blah blah blah), so I have a vague hunch this may have been a couple of other Unkommuniti peeps branching out so as to experience the novelty of recording an entire cassette without H.P. Lovecraft references; but it's a hunch, so I'm not sure. It could be Jonathan King for all I know. I vaguely recall being sent this copy by some Clench person, asking if I would consider releasing it on Do Easy, which confused me because it sort of looked like it was already available through Black Dwarf what with the cover and everything. Maybe that was just some provisional thing and it never received formal release, hence the absence from Discogs. Maybe they just wanted it to appear on a few labels. Anyway, I thought the tape was great but Do Easy had more or less bitten the dust by that point, as I recall. There's a chance I still have the letter from the guy somewhere in one of the six lever arch box files in which I have kept all of my antique correspondence from Cosey Fanni Tutti, Neil Campbell, the Grey Wolves, and other famous people, but it could take a couple of days to find even if I still have the thing, so - well, y'know...

In the Garden stands out as one of the stranger, more interesting weirdy cassettes I've heard over the years - drum machines deployed as sonic effects rather than for the sake of rhythm in the traditional sense, and those weird, dark titles - more like lines of poetry than a list of tracks. Maybe if Michael Gira had been hanging around with Portion Control rather than New York art gallery wankers...

Return to Index
Posted by Lawrence Burton at 10:49