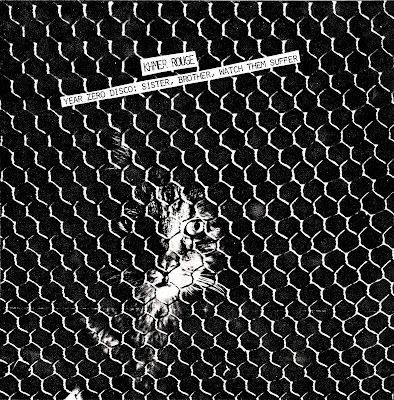 I asked Mex if it would be okay to slap this one up here as a freebie (along with a couple of other Dead Hedgehog releases) and not only did he say yes, but he very kindly sent me his own digitised file of the tape, meaning 1) I didn't have to do nuffink, and 2) being closer to the source, the quality may be marginally better than it would have been taken from my copy.

Anyway, I don't really know much about Khmer Rouge beyond what can be gleaned from the artwork, all scanned and included with the download. The late Robert Dellar apparently plays some keyboard on this one, for what it may be worth, and of course Mex was involved and should require no introduction, but in the event of your having missed all the memos, please refer to this website and don't be afraid to buy an ice cream while you're there. One of the things I always appreciated about Dead Hedgehog Enterprises was their obvious love of disco in an era and culture in which it had become more or less a dirty word. There were plenty of tapes with the circled A of anarchy doing the rounds, but only Dead Hedgehog slapped DISCO! on the cover of their tapes in that font you otherwise only ever saw used on the signs of newsagents.

Year Zero Disco is punky and low-fi by the standards of your regular disco artist, but it rewards repeat listening, and begins to sound like something in the general direction of Public Image Limited, LCD Soundsystem, Shriekback and those guys, once you're accustomed to it.

The tape came in a plastic sleeve of the kind you would buy so as to protect the cover of a 7" single, so the artwork - two sheets of A4, were folded over so as to fit into the package. This annoyed the hell out of me at the time, so I made my own cover from photocopies of the original so as to fit a cassette in a jewel case neatly filed away under K, between my tapes of David James and Killing Joke as nature intended. I've also included a scan of my reconfigured cover in with the download just in case anyone gives a shit.

Return to Index
Posted by Lawrence Burton at 10:15