Enhoenta Bödlar - William Bennett in the Sky with Diamonds (1985) C60 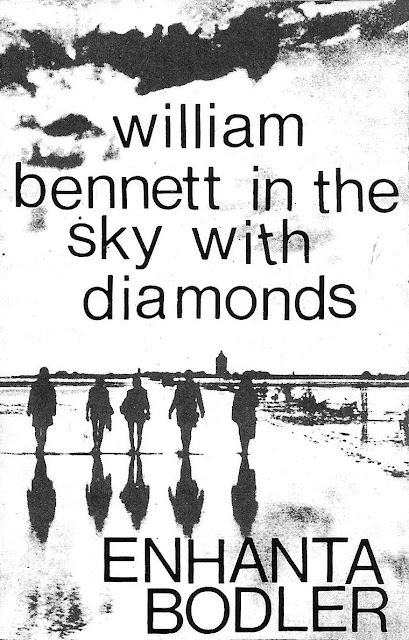 I don't know much about this one, at least not beyond what I've already said about Enhoenta Bödlar in previous blog entries - and before anyone gets snippy, the name seemed to get a different spelling every time it appeared, so I just stick with the one I like best. This came out on Trev Ward's Anal Probe - a tape label which seemed to switch identity every year. By 1987 they were probably Zeal SS or something else I'm slightly wary of naming here for fear of attracting undesirables, and this tape was listed as the work of Bomb the Day Nursery. Actually, as my copy came with what appears to be the original artwork for the sleeve - letraset and bits of paper glued on rather than a photocopy, it seems likely I had the last copy sent out before gender reassignment.

For a period it seemed that the duo of Uddah-Buddah and Roger Karmanik recorded and released material as both Enhoenta Bödlar and Bomb the Day Nursery, and a few tracks from Enhoenta Bödlar's first album appeared here and there credited to Bomb the Day Nursery. That said, I always assumed that Bomb the Day Nursery was more Roger's thing given his enduring fascination with those initials in Bodies Drowned Natural, Brighter Death Now, and possibly others I've never heard of. William Bennett in the Sky with Diamonds may be just Roger for all I know.

There's no track list below because there isn't one on the cassette, just two lengthy pieces, each taking up one side of a C60, and probably released through Anal Probe because of Trev's interest in ritual and atmospheric music, that being as good a description for this as any. If you want to know what you're possibly about to download, it's mostly layered loops with a heavily tribal feel, something in the direction of Muslimgauze or even that stuff David Byrne did with Brian Eno. I wouldn't absolutely swear that it dates from 1985, but it can't have been much later, and whenever it was, it was some way ahead of its time when you consider what else was around. I've never quite worked out the significance of the reference to the Whitehouse dude, and assume that was just someone pissing about and having a laugh, but it seems coincidentally and peculiarly prescient considering how much this shares with the stuff he ended up doing as Cut Hands.


Return to Index
Posted by Lawrence Burton at 11:01