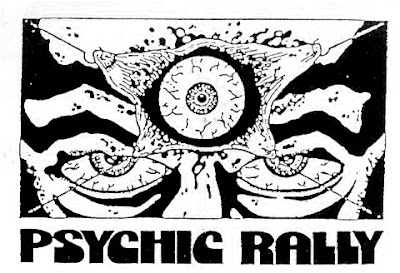 Nothing to do with the Porridge but, as Discogs describes it, a monthly radio show, which broadcasted more than 60 times between 1989 and 1995 on the alternative non-profit station Radio LoRa in Zurich, Switzerland. Hosted by Joke Lanz and Rudolf Eb.er, Psychic Rally developed new forms of radio techniques, cut-ups, sound recycling and sound manipulation. A flyer sent out in 1992 described it as using 'audio material from all over the world (harsh-noise, weird-and environmental sounds) to create a unique collage to blow the listeners mind to bits,' which seems fair, and here's two hours of it as issued by Statutory Tapes, the joke of which I've only just got now that I've typed it out. Tsk. Tsk.

It's spiritually similar to the RRRadio broadcasts by Due Process in the US, as shared here over previous weeks, and Due Process (or some representative thereof) make a fairly amusing appearance here towards the end of the first tape (which is probably the second tape if the Discogs page is accurate, but never mind). I personally prefer the aforementioned RRRadio which seems to do more in a shorter span of time, but this is certainly worth a listen.

While we're here, Rudolf Eb.er contributes one side to Maledicti, a split album with Awkward Geisha recently issued by Love Earth Music and available as a genuinely gorgeous slab of proper vinyl just like mom used to make from this website. It's probably the greatest thing I've heard by either of them and is massively recommended, so grab a copy while you can.

Download the stuff described above by clicking on this link.
Return to Index
Posted by Lawrence Burton at 07:32