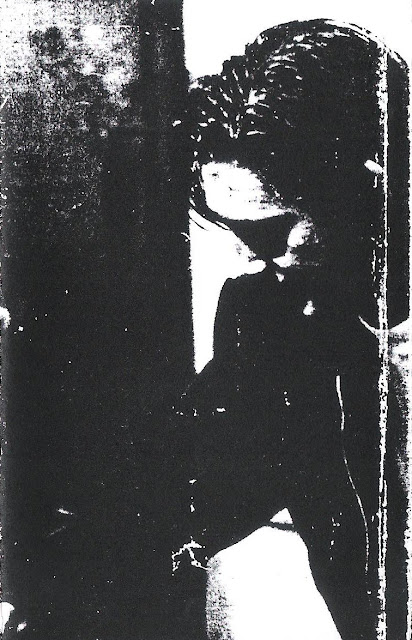 You may recall the work of John Jasper from Regulation Issue and this other tape. Here's a third one. I can't absolutely swear that these tracks didn't appear in some version on either of the other two tapes I've shared. In fact I can't even guarantee that this is exclusively a tape of John's work given his bewildering form for throwing the occasional piece of thievery into the mix - like the tape which turned out to be Keith LeBlanc's Major Malfunction, which I actually recognised as I'd already taped bits of it from Peel; plus I have a more recent tape which is obviously the first Leftfield album, but who fucking knows? The man was a mystery.
Anyway, I'm pretty sure this is all John, excepting a few samples you'll doubtless recognise. When editing I incremented the tracks, giving each one its title according to what John had written on the inlay card, then noticed that it's actually pretty hard to determine what counts as a full track on this tape, plus there are many more discreet pieces of music here than there are titles, so I gave up and assigned everything a number. The title Mule City comes from the first track according to the inlay card, which I've repurposed because it sounds better than John 1992. The scanned inlay card comes with the download so if you want to sit there and go through them, deciding which title refers to what, then please do. I seem to be credited on this tape too, as you may notice, although I have no memory of having been involved in any of these. Of course, maybe it was something from one of those many late nights fucking about with the portastudio at his house in Chatham. I have no idea. While we're here, I don't know who Jeff Smith was or recall any stage during which John had a drummer, but John Page was definitely a real person. I met him and thought he was a bit of a prick. His opening line was how he didn't realise anyone was still wearing shirts with button down collars. I was wearing a shirt with a button down collar at the time so it struck me as a knob-esque remark.
Anyway, if you a) enjoyed the other two, or b) have any taste whatsoever, you should also enjoy this one on account of it being fucking fantastic.
Madness, genius, fine lines etc.


Return to Index
Posted by Lawrence Burton at 10:41

Email ThisBlogThis!Share to TwitterShare to FacebookShare to Pinterest
Labels: Regular