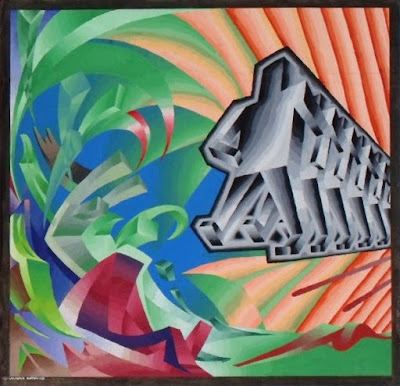 As a few of you may have surmised, I'm coming to the end of my five-ish year mission to digitise my entire tape collection, meaning I've now digitised all of the stuff which leaps out at me as requiring digitisation, leaving just 1) things which will only make sense to me and which I'm not really bothered about listening to, stuff taped from the radio and the like, 2) things which I would digitise and share except I still know the people who recorded them fairly well and haven't yet summoned up the energy to ask whether it's okay to give their shit away to strangers for free because I'm afraid that either they'll say no, or they'll say yes but I'll have to explain what the internet is, 3) collections of tapes by either factor X, Academy 23, or Konstruktivists which I've barely tackled. The reason I've barely tackled the Konstruktivists material is because I have forty-four tapes of stuff Glenn passed on to me and it can be quite a job working out what is what, and what has already seen the light of day in one form or another.

Anyway, no promises, but I think this stuff should be new to at least a couple of you, and hopefully it hasn't already appeared on some CD, or even on a previous download shared through this blog. The cover of Black December doesn't really have anything specific to do with this material, except I thought you might like to see it in colour.

Okay. 1988 is a guess but I think this dates from around then, give or take a year. Konstruktivists had released Glennascaul through Nigel's Sterile Records, recording Ikon during the same sessions and that was supposed to be the next record, a twelve inch single, except it never happened. Ikon was also the first studio track with Joe Ahmed in the group. Glenn then went through a couple of years of domestic difficulties, mainly just the practicalities of holding down a job, getting married, having a kid, finding places to live, and the usual stuff. Jihad-e-Sazendegi (meaning Crusade for Construction) was to be the fifth album and bits and pieces had been recorded at Joe's place in Harlow, Essex, and they sounded fucking amazing too; but somehow it never quite came together what with life getting in the way and everything, and eventually I guess the album was forgotten.

This is my tape of what was recorded, except I'm not absolutely sure of the details. I've a feeling some of these titles may be ones I came up with for the sake of writing something on the inlay card, and although I'm fairly certain the first seven tracks were recorded with Joe for the proposed album, there may be some wiggle room, and the second half of the tape sounds like Glenn solo to me, so is quite possibly something else entirely. Anyway, it's good stuff, so hopefully you'll get a kick out of listening to it.


Download the fourteen tracks by clicking on this link.

Return to Index
Posted by Lawrence Burton at 17:02