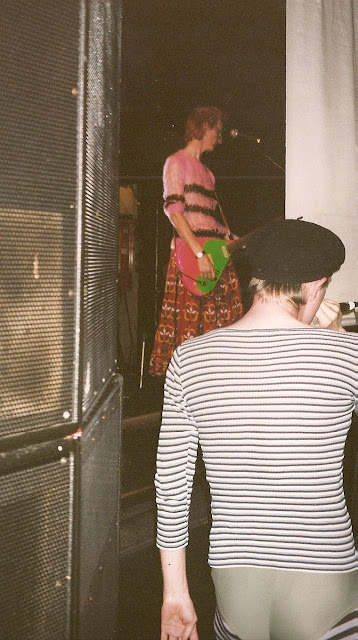 This was a Mad Pride event of some description, hence the opening address by Tim Telsa who wrote something in the Mad Pride anthology put together by Robert Dellar; and this is a tape of the gig I was sent by Stan because I'm on it, so not an official release or anything. I had joined the Ceramic Hobs on stage for about thirty seconds during their previous appearance at the Garage, improvising some shit or other so as to prevent Simon reading excerpts from the Qur'an - which he threatened to do in the event of no spontaneous audience contribution being forthcoming. This time I wrote out a whole thing as an LDB performance, which is track six. I spent a few weeks memorising it, and still forgot a few parts. I'd sent Stan a tape of what I planned to do over an arbitrary loop from Illmatic, assuming the Ceramic Hobs would probably just jam while I dropped science, as we say in the rap biz, but for some reason they used the loop and just sort of noodled over it. I hope no-one was under the impression I was expecting them to use that loop from Illmatic, but never mind.

The gig was recorded due to Stan of the Ceramic Hobs suggesting I hang onto the tape recorder, except I was performing, so I left it with Dave (Apostles, Academy 23, UNIT etc. etc.) and my friend Eddy who had come to the gig, possibly to lend me moral support, or even immoral support. Anyway, that's why you can hear myself, Dave and Eddy yacking away at the beginning and then again at the end of the tape. You can also, if you listen closely, hear Jim MacDougall loudly delivering edgy comments and observations from elsewhere in the audience just in case anyone had stopped thinking about him for a moment. Crazy times.

Sound quality is a bit rough, but it sort of works, I think. Apart from me, it was a pretty great gig, which I'd say comes across on the tape.