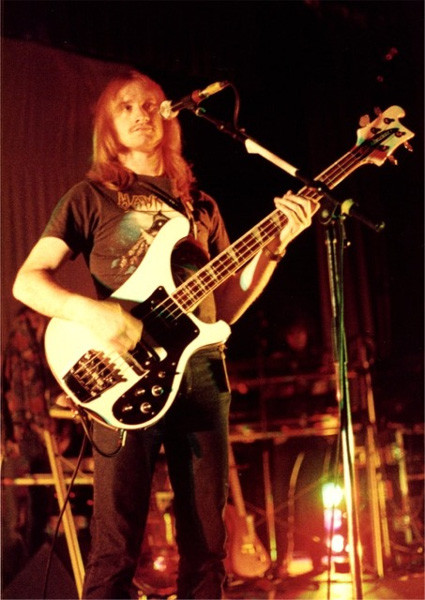 Here's another one, as per arrangements made t'other week. I don't know much about this lot either, except a few of them contributed to the previous volume. Research reveals that Gunslinger were based around one Alan Davey (pictured above) whom Discogs describes as the second-longest serving member of Hawkwind, so that's interesting, and perhaps accounts for why those two tracks are possibly my favourites on this tape. I'm fairly sure I saw Workforce live at the Green Dragon, Stratford-upon-Avon back in the early eighties - one of those sort of grunting funky Test Dept with a trumpet bands falling somewhere between Slab and Hula, as I recall, and very good too, although I suppose it might be a different band with the same name. In any case the internet doesn't seem to remember much about their ever having existed. Patrol were on the second A Country Fit for Heroes compilation on the studded leather No Future label, but that's about all I've found out about them. The Same was obviously Robert Cox, later of Rimarimba, and the man behind Unlikely Records who put out this tape. I assume he's probably also the man behind the track by Robert Cox.

A few of these are given here as [excerpts] because I couldn't be arsed to increment each individual thirty second snippet of something or other where artists contributed what sounds a lot like advertising for some album they were about to release, plus titling a single track as, for one example, The Black Box / We Care / Summary / Scenes of Today / Sandra / The Black Box as listed on the cassette cover struck me as cumbersome. Personally I wish they hadn't done this, because here, I've put together a montage of our best stuff for your compilation just seems to reduce the whole enterprise to advertising space, aesthetically speaking, regardless of some of that material sounding good; but, there's not much point in whining about it now, nearly four decades later, because each to their own, and admittedly the selection as a whole remains very, very listenable with plenty of surprises.

Return to Index
Posted by Lawrence Burton at 13:47