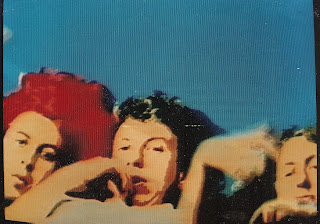 Total Big was the first band I was in which played live to any great extent. I wrote about us at considerable length here, and I can't be arsed to write it all out again. This is a tape of our first two rehearsals, as recorded and edited by Chris. The first (tracks 1 to 12) happened in Chris's garage in Kemsley, Kent on Sunday the 17th of November, 1985. Chris played drums. I played guitar. Carl sang and occasionally mucked about with Chris's small but impressive Casio synth. We'd never played together before, so we just fucked about, and then listened back to the tape picking out things which sounded like songs, then elaborated on those. The second rehearsal (tracks 13 to 27) was at Hollytree House in Otham, where I was living at the time, on Saturday the 23rd of November, 1985 - which is probably why it all sounds a lot like Psychic TV, it being the 23rd and all. I was at art college in Maidstone, and there was some event coming up at which we were going to be playing in front of an audience, so this rehearsal was focused on what songs we had, if you could call them songs, which we did. So there you go.

Keep in mind that this is a tape of rehearsal material, so if you're expecting it to resemble high quality Emerson, Lake & Palmer outtakes, you may experience some disappointment; and keep in mind that no-one is forcing you to download it.


Download the twenty-seven songs by clicking on this link and make your own bleedin' cover.

Return to Index
Posted by Lawrence Burton at 07:42