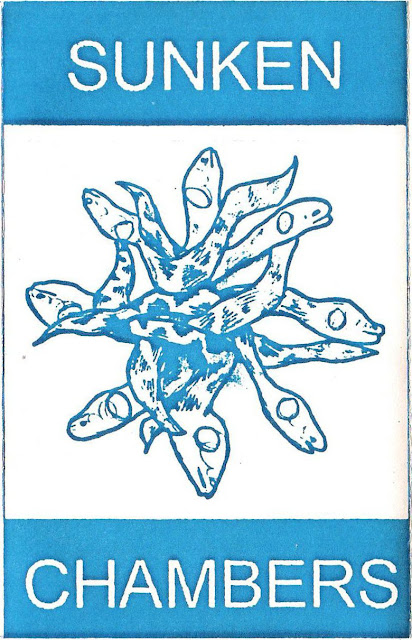 I recently came across an Anschluss track on YouTube, which was interesting because that was me for about five minutes. It was a track taken from this compilation, and yet when I played the clip it turned out to be one of the other tracks from the tape. Now, having edited this thing, I can see how the confusion arose regarding where one track ends and another begins.

I know. Cool story, yeah? Feel free to retell it at dinner parties and claim it as your own.

Anyway, clearly this has already been digitised by someone else, but nevertheless here it is again with the correct titles, unless I too have fucked up, which is admittedly a possibility.

Anschluss was supposed to be a postal collaboration with the bloke who did Hoax! magazine, partially so as to focus all of his attempts to involve himself in everything I did in one place in the hope he'd leave everything else alone. The idea was that I'd build it all up from samples of his demos, but he started to send stuff which sounded like Nik Kershaw and lo, my enthusiasm didst wane; so that was the end of that, apart from the tracks on Sunken Chambers plus an unreleased tape elsewhere on this blog if you can be arsed to look for it. Apparently I was going to send it to Mindscan to see if he wanted to put it out, but I guess I never got around to it.

Sunken Chambers was the work of the excellent Kyran Lynn, CEO of Racing Room Tapes, whom I vaguely recall as having sent me a few good ones when I was reviewing stuff for Sound Projector magazine. Curiously, I also vaguely recall having been sent a Dachise CD for review in the same, although I can't remember what I made of it. Ed Pinsent was of course the editor of the Sound Projector - and still is come to think of it. Himself and Harley Richardson were in Pestrepeller with jovial, light-hearted raconteur Edwin Pouncey. I used to know Harley but fell out with him after he started posting links to climate change denial articles on my facebook page and chanting the people have spoken whenever anyone mentioned Brexit. Sigh. Another one bites the dust.

I don't know anything about the rest, except everyone has heard of Expose Your Eyes, obviously; and Ozone Bandits was Dave Hopwood. Sunken Chambers is mostly weirdy noise music, but is very good of its type and really takes hold of you after a couple of plays.

Download the thirty-one tracks and cover by clicking on this link.

Return to Index
Posted by Lawrence Burton at 12:54