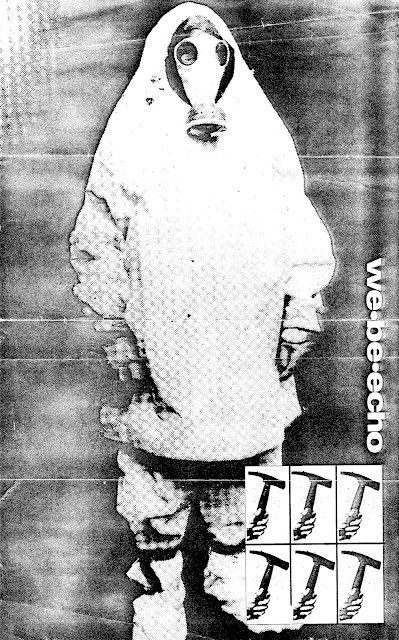 As promised a couple of months back, here's some more We Be Echo. This is another tape procured from Larry Peterson in the wake of his having decided that industrial music was evil and that none of these bands are ever going to be famous now so there's not much point hanging on to any of this stuff. I assume I compiled this from a number of tapes Larry gave me, but I wouldn't swear to it, and have no idea whether the title of Various Obscure Recordings came from me or Kevin Thorne, if it even matters.

Anyway, where the previous thing comprised radio sessions, I suppose you'd call this studio material. So far as I'm aware Kevin recorded everything more or less live onto the tape deck of a typical home stereo, so it's pretty basic, but he always managed to make a little go a long way - although it may be worth mentioning that I suspect some of these tracks may not have been the finished article. Most of this stuff seems to have been recorded with his wife Bobbie, so I suppose you could regard this incarnation of We Be Echo as a sort of low rent Chris & Cosey should you feel the need. Not having listened to any We Be Echo for at least a decade prior to excavating these tapes, I had built up a vague impression of them/him as more or less six parts Cabaret Voltaire to four parts Throbbing Gristle, but listening to this stuff again I realise it really did have a fairly strong identity of its own.

With a little bit of support and enthusiasm shown at the time, we could have had more of this instead of Howard fucking Jones, but whatever. Too late now. You blew it.

Return to Index
Posted by Lawrence Burton at 11:02 No comments:

Email ThisBlogThis!Share to TwitterShare to FacebookShare to Pinterest
Labels: We Be Echo 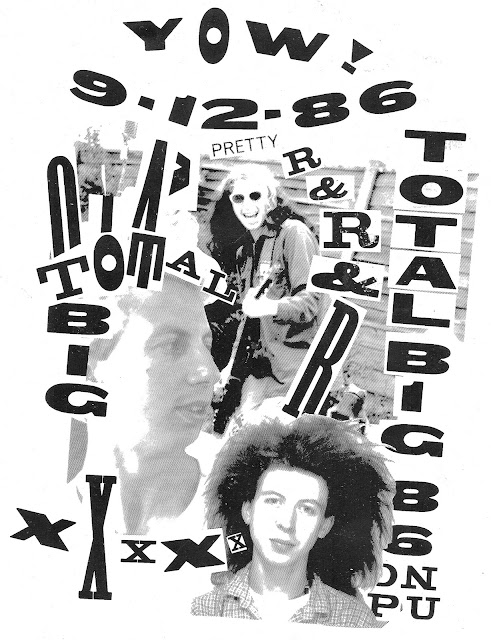 Here's some more Total Big, rehearsals in the kitchen of Hollytree House in the village of Otham in Kent, first fourteen tracks from the 15th of February, 1986 and the rest a couple of weeks later on the 1st of March. This is the fourth Total Big cassette I've slapped up on this blog, and if you think the first three were fucking amazing (a scenario I imagine might be facilitated by it being the first music you've ever heard in the event of your having been raised by hogs on a desert island) then you're in luck because this is more of the same. Total Big were myself playing my trusty Teisco guitar, Chris on drums, and Carl on vocals, which I mention because I can't remember what I said about the band in previous entries and can't be arsed to check. This one sounds quite garagey to me, what with the drums pounding away louder than the guitar, although it may be just because I'm presently reading a book about music in the Medway towns, Billy Childish and all that - albeit a book about music in the Medway towns so violently definitive that it mentions Tim Webster a grand total of once in the first three-hundred pages and yet has already mentioned fucking Dodgy (who were shit and don't actually come from or have any association with Medway) five or six times for the sake of comparison.


Download the twenty-one tracks and nothing else by clicking on this link.


Return to Index
Posted by Lawrence Burton at 12:07 No comments: 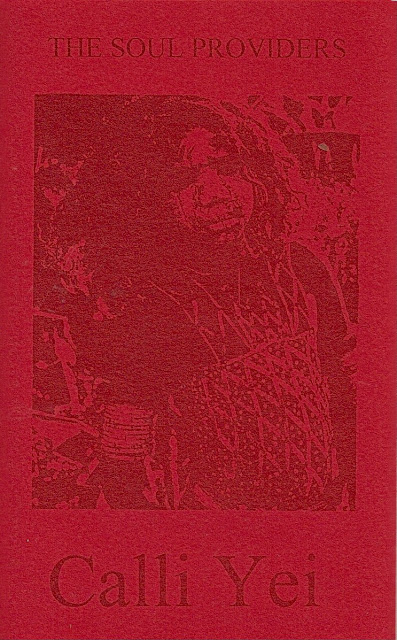 I'm not sure there's much I can say about this third Soul Providers tape which hasn't already been said either here or here. Ed, Steve and myself recorded this whole thing live onto tape in my front room on the last day of October, 1998 - which I suppose would have been Halloween. I suppose we should have made something of that, but never mind. Aside from a couple of minutes of me testing the levels right at the beginning, this pretty much works as a single track, and can hopefully be listened to as such. Anyone who has been listening to these things as I post them might also note that this one sounds more expensive than previous efforts. Either I had just borrowed some new fancy effects box and was shoving everything through that, or maybe we were just getting better at it, whatever it was.

Trainspotters might like to note use of a certain drum pattern at one point, a drum pattern which older boys and girls will possibly remember from either Third Door from the Left's Under Attack or even Cabaret Voltaire's Nag Nag Nag. The (admittedly not very interesting) story behind this is that back in the mists of time I asked Kevin Thorne of Third Door from the Left whether he had bought Cabaret Voltaire's old drum machine or something, but it turned out that Stephen Mallinder had done him a cassette of rhythms for his general use, and so Kevin very kindly ran me off a copy. So there you go.

For what it may be worth, the name Shoulder Lion - which I enjoyed for its Dadaist potential - came from an amusingly (to me) poor translation of Acolmiztli, the name or possibly title of a Prehispanic ruler of the Mexican city of Texcoco which appeared in some library book or other. A more accurate translation might be Lion of the Acolhua People, except miztli means feline rather than any specific type of feline, and the name of the Acolhua - one of those cultural groups who have since been erroneously identified as Aztecs - includes a term referring to a shoulder, or which can be taken to stand for the same, but otherwise doesn't directly translate without an essay's worth of explanations.


Return to Index
Posted by Lawrence Burton at 12:30 No comments:

Email ThisBlogThis!Share to TwitterShare to FacebookShare to Pinterest
Labels: Cabaret Voltaire, Soul Providers, Third Door from the Left, We Be Echo 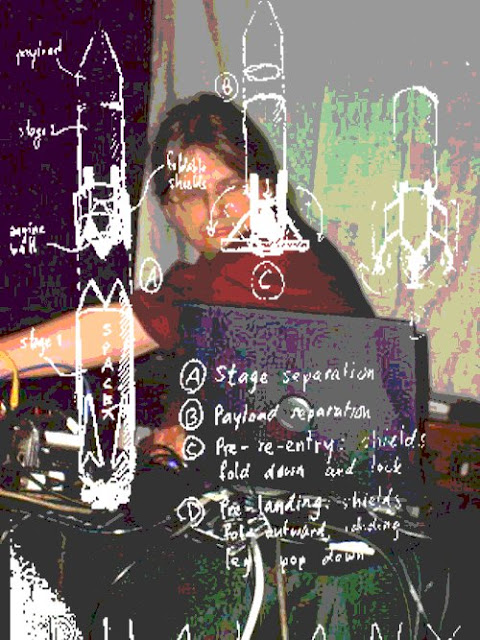 This, as the title suggests, was Nocturnal Emissions live at the Garage in London back at the tail end of the last century, an event either put on by or serving as a recruitment drive for the Association of Autonomous Astronauts. I've seen them - or if you prefer him - live on a couple of occasions since, and this was probably the lesser of the gigs I attended, but it was the one I attended with a tape recorder stuffed into my trusty green canvas bag, so here we are. When asking Nigel for permission to give away his work for free, I described this tape by saying I'm certain we've both heard worse which probably explains why I never really made it in marketing. It's not terrible, but the PA was far too quiet on the night and I was stood at the back, so you can hear a lot of background chatter on the recording. In fact the recording sort of suggests Nigel tinkling away on the piano in the corner of a restaurant full of yappy fuckers. Anyway, I mentioned that the tape also captures ten minutes worth of my travelling home on the tube after leaving the venue, which sort of makes it a field recording - as Nigel also suggested - which might be a better way of looking at it.

The material is great, and the sound quality is actually decent - allowing the listener to fully appreciate John Eden and myself arguing over which of us owns the rarest Maurizio Bianchi bootleg album even during the noisier sonic assaults* - and it's a faithful record of the live event, if not the music performed, if you see what I mean. Superior versions of a couple of these tracks (albeit not from this gig) also appeared on the definitive Nocturnal Emissions live album Electropunk Karaoke, if you can find a copy. If you can't, you might try the Earthly Delights site. Maybe he'll reissue it at some point.

Download the twelve tracks by clicking on this link.


*: John won as proud owner of Schrecklich Tropft aus dem Hahn des Führers which is just the sound of a tap dripping with the dialogue from an episode of the BBC's Colditz in the background. A copy was recently sold for four thousand quid on Discogs.
Posted by Lawrence Burton at 11:59 1 comment: 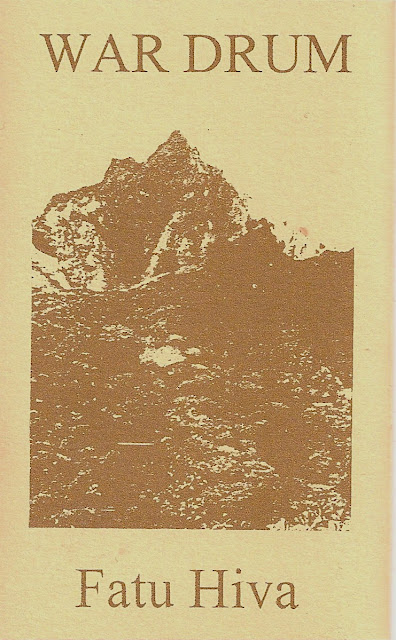 Fatu Hiva was the fourth tape I recorded as War Drum, the first I can still listen to without wincing, and possibly the best thing I've ever recorded - which I state as someone who generally regards most of his own back catalogue as disappointing at best. War Drum's mission statement (what I thought I was playing at) can be extrapolated by referring to previous entries, but could probably be summarised as Death In June with Precolombian Mexican lore in preference to the European stuff and associated Nazi tendencies. I was trying to do something folky without necessarily sounding folky - Looking for Aztlán notwithstanding. Most of this stuff makes sense if you'd boned up on Mexican history and Quetzalcoatl as much as I had, so please feel free to visit the anthropology or mythology sections of your local book store in order to learn more. That said, Caught in the Glare was inspired by my having read up on the planet Mercury, and is - I suppose - a sound painting, if you will, of radiation blasting back out into space from the planet's night-side surface as it slowly turns. The track Fatu Hiva was inspired by Thor Heyerdahl's account of his living on a remote island of the same name.

Musical points of potential interest might be the covers of tracks by Severed Heads and Tuxedo Moon, also that Andy Martin of the Apostles, Academy 23, and UNIT plays electric guitar and provides backing vocals on Looking for Aztlán; and The Cage and Night Song were recorded with Glenn Wallis of Konstruktivists on vocals when he came to visit one evening. If you want to dig really deep, part of New God was recorded on a digital studio thing owned by James and Jason of Orange Can, who were NME darlings for a couple of months but somehow failed to become the next Stone Roses.

As for the rest, my listening was pretty much exclusively rap, R&B and the like by this point, the influence of which you'll be able to hear in some of these tracks - particularly For Christopher Rios which was my tribute to the recently deceased Big Pun.

So there you go, on the strength of being arguably the least-shit thing I've ever done, please download and enjoy this one. Amazingly it sold about a hundred copies, or at least I had to do a second run of fifty copies at the place I used to use in Bromley, and by the time I got around to packing up all my shit to move to America, they were all gone; so even if I didn't sell every last one, Fatu Hiva was at least much easier to give away for free than all my other stuff.


Download the eighteen tracks, cover and lyric sheet by clicking on this link.

Return to Index
Posted by Lawrence Burton at 13:08 No comments: