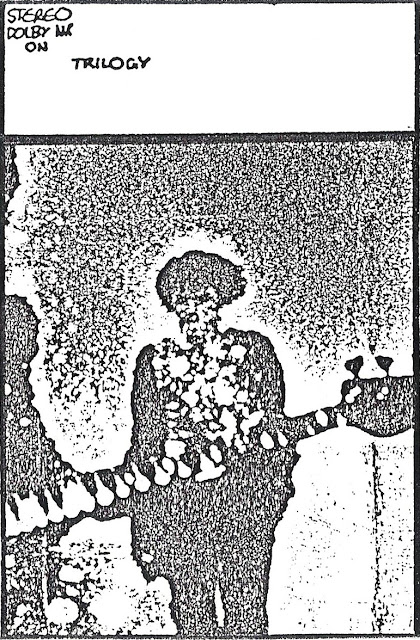 Return to Index
Posted by Lawrence Burton at 08:53 4 comments: 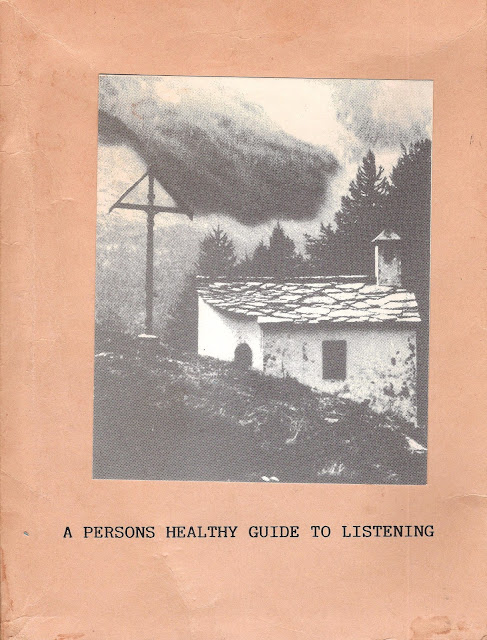 This was a cassette release by Regelwidrig Recordings, the work of one Simon Kelly whom I vaguely recall as a wonderful guy with whom Glenn Wallis, myself, and Paul Condon shared pints at Bradley's Spanish Bar in Hanway Street. Annoyingly, it was one of those cassette releases which came clad in fancy, fiddly packaging which meant you couldn't just slot it in with the others on the shelf. I appreciate the effort to keep things interesting and special, but there were a few people guilty of this sort of thing and it was always kind of annoying, and the end result nearly always seemed kind of half-arsed and never as good as the artist presumably hoped it would look. This one came in a large card box with a photograph slapped on the cover at an angle and an apostrophe missing from the title; and anyway, should it not be A Person's Guide to Healthy Listening? Wouldn't that make more sense? Anyway, opening the box - which is no longer necessary since it all fell apart with age and now looks even crappier - caused bits of paper to spill forth across one's listening space - track lists, information, and bits of artwork which I presume to have been supplied by the individual artists because they're all different shapes and sizes and only five of the contributors are represented in this way.

Which is probably why I never listened to the fucking thing more than once, which is a shame because Simon clearly put a lot of effort into it and spent some money on getting it properly mastered and so on, as you will hear. In fact, this tape makes for pretty convincing listening once you've sat down, having swept up a million bewildering pictures of Islamic shoes supplied by Bryn Jones, the man who invented the racist instrumental, it could be argued.

You should probably know of at least a few of these artists, and of the ones I hadn't heard of either, there's not much I can tell you. I always assumed Shock City was something to do with Stefan Jaworzyn of Whitehouse who briefly ran a similarly named label and publishing imprint, but apparently not.


Download the thirteen tracks and various related scans by clicking on this link.


Return to Index
Posted by Lawrence Burton at 15:18 No comments: 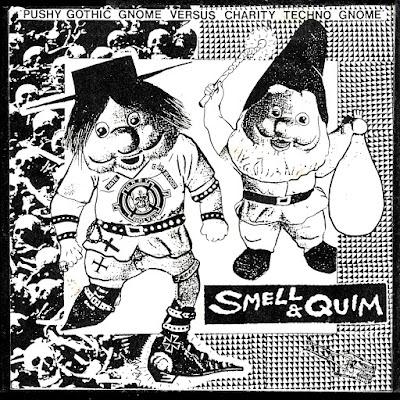 I may be wrong but from where I've been stood, Smell & Quim are pretty much the saviours of noise music as we know it. Power electronics was sounding a bit samey at the tail end of the eighties, all knotted up in an arms race to be the harshest, loudest cheerleader for the most obscure former member of Hitler's cabinet or proponent of some stomach churning sexual perversion which even William Bennett regarded as going a bit far, and with the rudest picture yet on the cover of the tape. It was a war which no-one could win, and then Smell & Quim turned up to flip the script by introducing a sense of humour to the proceedings, or something which looked like a sense of humour from a certain angle but may simply have been straightforward insanity. Andy Martin told me he regarded them as the Chas & Dave of industrial music, which probably only works if you think Chas & Dave are a bad thing. I posted the above cover on my facebook page, and a person who has apparently taken it upon himself to police my social media quipped gratuitous sexism masquerading as subversion, so thanks for that valuable insight, Pat Robertson.

I don't really know what Smell & Quim are, but they've certainly made things a lot more interesting over the years, and also disgusting, but in an interesting way. This one in particular seems to serve as a decent illustration of why there's probably not much point thinking too hard about any of it. Imagine that the giant stone head full of guns from John Boorman's Zardoz made a disco album, and everyone hated it, which pissed off the giant stone head full of guns from John Boorman's Zardoz so much that his next work was an electronic piece recorded mainly in vengeful spirit; and that's how this album sounds to me. According to Milovan Srdenovic it came about when the title was mentioned as that of a fictitious album in an article on Smell & Quim in Seymour Glass' Bananafish magazine, and it was recorded so as to bring reality in line with the fiction, I suppose you would say. It was issued by Joel St. Germain's SPITE label in a hand-tooled edition of fifty copies, all in a nice looking little box with a naughty picture glued inside.

I wrote to Milovan Srdenovic to ask him if it would be okay for me to give his stuff away for free, and he said yes, because Pushy Gothic Gnome Versus Charity Techno Gnome should be heard by as many people as possible (or words to that effect); and he's right.

Return to Index
Posted by Lawrence Burton at 11:35 1 comment: 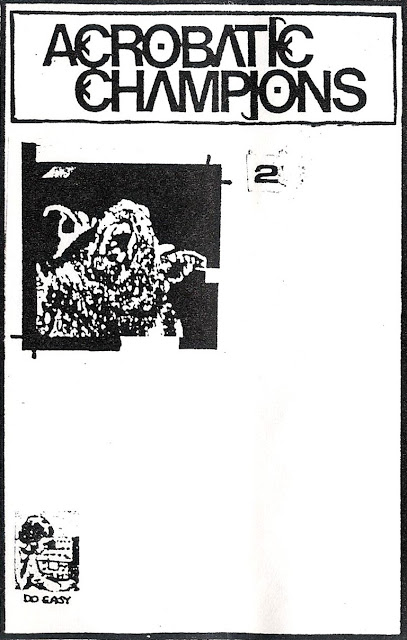 
Return to Index
Posted by Lawrence Burton at 08:16 1 comment: