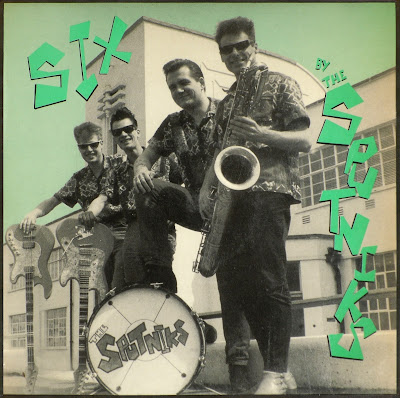 I intended to share this one a while ago seeing as I'd digitised it and even edited out all of the pops and clicks, but Tim of the Sputniks never replied to my request asking whether it would be okay to give away his work for free. I actually don't think he would have had a problem but suspect he never saw the message, being an oldie like myself, but one less able to navigate all the convolutions of this new-fangled facebook shite - and I didn't want to ask again in case he had seen the message but had been too angry to formulate a response.

Who the hell am I talking about, you may ask. Well, he was my pal and he recently bought the farm, which is upsetting, and I already wrote about him at length here.

For someone who was so busy, musically speaking, it still seems weird that Tim should have left such a scant recorded presence - this 10", a few tracks on the Hangman compilations, and I expect there are still tapes of Johnny Gash and others in a box in someone's attic which will probably remain there, which is a real shame; so that's why I'm sharing this now that it's gone posthumous, in memorial to a guy who deserves to be remembered better than he probably will be. If you want a physical copy, there's still a couple on Discogs last time I looked.
Thanks a fucking bunch, 2020, you utter fucking cunt.
Rest in peace, Tim, old buddy.

Return to Index
Posted by Lawrence Burton at 13:48 1 comment: