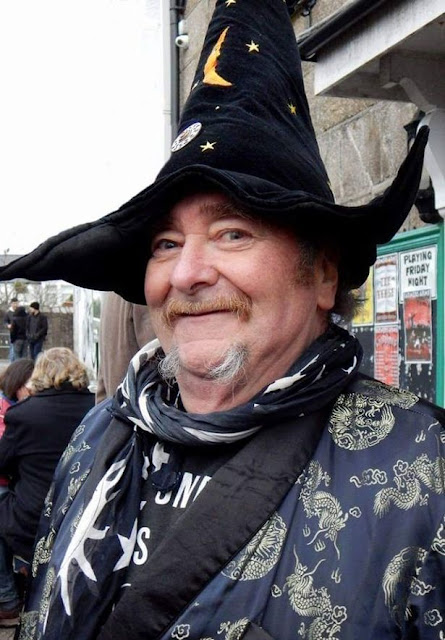 Doc Mustard was Andrew Oliver, a much-loved busker of Coventry and then somewhere or other in Cornwall, who passed on just a couple of weeks ago so this is additionally a sort of tribute. Back in the eighties he was half of Doc Mustard and the Cobalt Kid - little fat guy with one of those faces which meant he always looked surprised playing the synth, plus a beanpole-style hairy metal dude in stripy trousers in guitar solo heaven so er... Soft Cell with more of a Benny Hill vibe, maybe. Oliver was something in the Coventry music scene for a while, playing in various ska or reggae bands of the time. I saw him when he played Maidstone College of Art with his Cobalt sidekick, possibly '85 or '86.

As you will hear, it's a bit music hall, maybe a bit Ian Dury, or even >shudder< Black Lace, and probably never got too many rewinds on the Sonic Youth tour bus, but in a live setting this stuff was so weirdly in your face and clearly gave no shits about seeming even remotely cool, and was accordingly very difficult to resist. Listen close and you can sort of imagine how it would have been had Brian Eno ever produced Bad Manners, or summink, particularly on You Go Your Way.

So here's to you, Mr. Oliver, obviously a much loved figure amongst the many who knew him, or even just knew of him. There's a load more out there on Soundcloud if anyone wants to have a look around. I'd link a few of the news articles I found but most of them require that the reader wait three or four minutes while all the shitty pop-up adverts sort themselves out.

Download the five tracks by clicking on this link.


Return to Index
Posted by Lawrence Burton at 13:18 No comments:

Email ThisBlogThis!Share to TwitterShare to FacebookShare to Pinterest
Labels: Doc Mustard and the Cobalt Kid

I suspect this was one of those ideas which didn't seem quite so amazing to its creator next morning. I don't think CFC025 ever made it into any of CFC's photocopied lists of available tapes, and having slipped it onto the sticker with which he tried to promote the live Nocturnal Emissions cassette which was eventually vinyled as Chaos (tough - if all you beardy hipster shitbags can have your 'vinyls' then I get to use it as a verb), Cause for Concern's Larry Peterson seemed reluctant to further push the thing.

'It's nothing. Anyway I've deleted it now.'

Somehow I eventually managed to diddle a copy out of him, no art, no cover, just a tape with those generic CFC labels designed by Kevin of We Be Echo; and I listened to the thing, and it all became clear.

Actually, contrary to Larry's expectations of the morning after, I found it very entertaining.

Download whatever the hell this thing is by clicking on this link.


Return to Index
Posted by Lawrence Burton at 11:44 No comments: 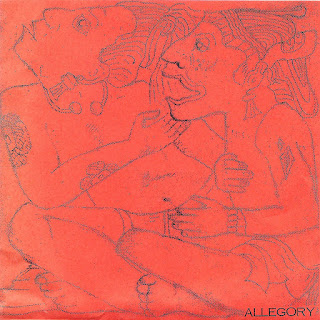 Allegory was a compilation put together by Mark of Impulse, the only one which wasn't associated with an issue of the mag, and, so far as I recall, dating to the time he was making a go of running his thing as a label - see also Konstruktivists AGM tape and the Muslimgauze 7" he released. I'm sure you're both all familiar with most of the contributors here - Pure Motorised Instinct was Stephen Jarvis from Nagamatzu, Tautologize represents Mark's brief tenure as part of the factor X pyramid scheme, and so on and so forth.

To briefly adopt my Negative Neddy persona, I have to say, thirty years later and I'm still fucking mystified by the brief descent into industrial rock karaoke with underwhelming cover versions of chart smashers by Front 242 and the Throbbing Gristles, not least because I seem to recall Another Headache being somewhat better than this one might suggest; but never mind. Maybe it's just me. Once over those particular humps, the tape settles into a very pleasing rhythm of not-quite-ambient sound conlcuding with Dark Star's stunning P2C2E.

There was also a tiny wee booklet of artwork with this one, some related, some not at all related and therefore maybe pertaining to persons who failed to stump up their tracks in time (guessing here), so I've scanned that and it's included in the download.


Download the nine tracks, cover and booklet by clicking on this link.

Return to Index
Posted by Lawrence Burton at 11:20 No comments: 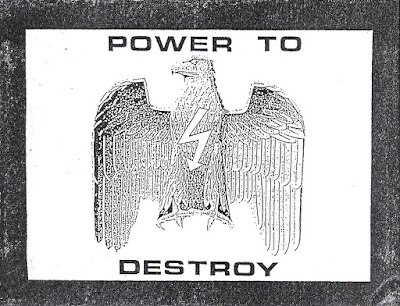 Usual terms and conditions apply regarding imagery which is probably supposed to upset you, aside from which, Trev really surpassed himself with the packaging of this one and probably would have won a design award were it not for all the pictures of rotting corpses. The cover was photocopied onto card, with each one presumably individually assembled so as to resemble something like a cigar box, with the tapes kept in a slide out tray thing. The tape itself was likewise pretty decent, with a fair bit of sonic variety, and certainly more than you might have expected from the scarier end of the electronic landscape. A few of these are unlikely to require any introduction (and the Ramleh track is blistering, by the way), and I'm sure you're perfectly capable of Googling the others, because I've never heard of them either.

Four of these tracks actually came from me, these being the work of Konstruktivists (of which I was a member at the time), Family of Noise, and Dada X (both of which are represented elsewhere on this blog, so please feel free to have a poke around in the index linked at the foot of this entry) and, at the risk of offending purists, I've actually replaced the tracks as digitised from my copy of the compilation with copies digitised from the master tapes. So they're the exact same tracks, just better quality through not being fourth generation copies.


Download the twenty-one tracks and cover by clicking on this link.

Return to Index
Posted by Lawrence Burton at 13:59 No comments: 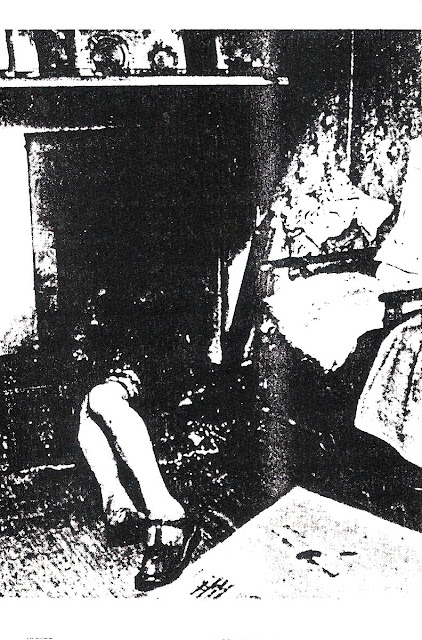 I've nearly digitised all of my compilations now, with only Impulse mag's Allegory and Trev Ward's Power to Destroy (next week probably) still to be transmogrified, so far as I can work out. This one escaped the routine sweeps because I had it under M on the shelf as a Mlehst tape, it being the work of the man behind Bandaged Hand Produce.

Aside from being one of those collections I always found exciting because you have no idea what the fuck is going to come out of the speakers when you first press play, this one is also distinguished by its exceptional sound quality, which seems to have been a thing with Bandaged Hand. I really should have picked up a few more of his tapes when it was still possible to do so.


Return to Index
Posted by Lawrence Burton at 13:27 No comments: