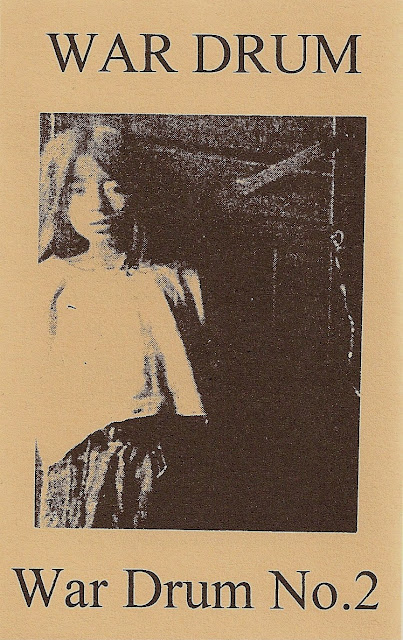 I've already made most of the apologies, excuses and disclaimers I might make for this cassette here, so read that if you haven't already done so, otherwise this one probably won't make a lot of sense. Here I was beginning to get fairly pissed off with the limitations of my equipment and tracks recorded by bouncing from tape to tape, hence the inclusion of "previously unreleased" (ho ho ho) material recorded a few years earlier as Family of Noise: two ill-advised neofolk covers and Patriotic Hymn, which was named after the painting by Giacomo Balla and shouldn't as such be taken as indication of my ever having been a raving Nazi. I've always found nationalism interesting, particularly in cases (notably that of Mexico) where it has an arguably positive influence, serving to unify an oppressed underclass in conjunction with revolutionary and hopefully socialist ideals; and the sweeping condemnation of nationalism as a principle is often as much about class (or sneering at the thickies) as it is about politics. Anyway, Patriotic Hymn was supposed to be part of some longer pseudo-classical thing which I actually began to compose as music on that special paper with the five lines and staves and shit, but never finished aside from this and Communication which was on the previous tape. As with the more misanthropic themes on this effort, and the martial aesthetic arising from my fixation with an essentially martial culture, I hopefully shouldn't have to explain that such ideas reflect my interests of the time rather than my most cherished personal beliefs.

The rest of it more or less explains itself, I would hope. The tracks from Mitochondrial Eve onwards benefit from Eddy Walsh kindly lending me a ton of equipment, including a lovely four-track portastudio, hence the dramatic improvement in sound quality for the rest of the tape. I feel there's also a dramatic improvement in War Drum as a musical entity which can be heard on this tape as the new age power electronics evolves into a sort of er... ritual ambient R&B, or summink. War Drum No. 2 probably isn't a masterpiece, but fuck it, this one still sounds pretty good to me.

Glenn Wallis of Konstruktivists provided the rhythm on Education as War by the way, if that makes it any more likely that you'll listen to the thing.


Download the twenty-two tracks, cover and lyric sheet by clicking on this link.

Return to Index
Posted by Lawrence Burton at 10:59