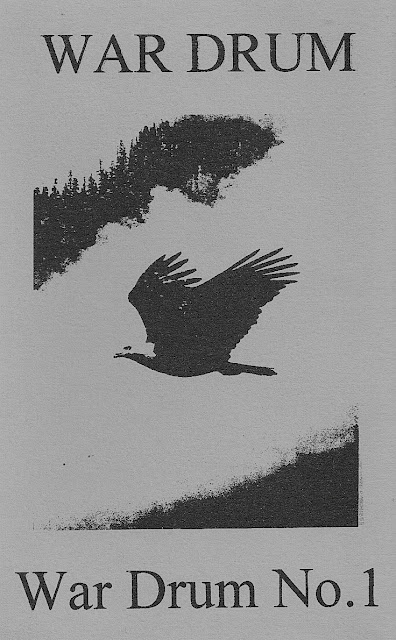 I wasn't going to bother with this one, but I had a listen and it's not quite so bad as I remember, so what the fuck.

By 1996 I was thoroughly sick of being me and had decided to be someone else for a while. I think I was probably going round the twist somewhat. One element of this awakening - what I have come to view without irony as a Shamanic process, roughly speaking - demanded a whole shitloads of breaks from the past and from previous ways of doing things in so much as this was even practical. I was tired of the sort of material I wrote or drew or painted or recorded and had decided to start again from scratch. Another element of this awakening was a growing obsession with Mexico, specifically late Postclassic central Mexican culture - the people generally but incorrectly remembered as Aztecs. By obsession I'm not referring to just a T-shirt and a couple of library books, but something which pretty much consumed me and changed the course of my existence, and about which you can read more here if you're that interested.

War Drum was a fresh start because I felt like making music once again, and given my interests of the time it came out as something akin to Muslimgauze but with an entirely different focus, which was intentional. One problem I had experienced, and the one which meant I hadn't actually recorded much of my own music for at least a couple of years, was a lack of equipment. Specifically I had a few bits and pieces but nothing on which to record anything, so I just went ahead and shoved everything into a little four channel mixer and recorded it more or less live onto my home stereo, but for occasionally bouncing tracks by plugging a second tape recorder into the mixer. The quality wasn't great, but then I reasoned it would be no worse than any of those Do Easy tapes recorded by more or less the same method; also that I should be able to produce something listenable if I made some effort to work around the limitations of this set-up, and to keep things simple.

The reason I wasn't going to bother is nothing to do with the quality of the music, such as it is, but that War Drum No. 1 dates from a time when I was still dishing out the benefit of the doubt to certain neofolk types, as indicated by two covers of Sol Invictus songs and at least a couple of lyrical flourishes betraying just how entertaining I once found that Boyd Rice album. I've never had any racial agenda - excepting perhaps a touch of Aztec Fundamentalism coming from a philosophical or aesthetic angle more than anything else - and nor anything along Social Darwinist lines; but I was keen on forging something slightly fierce and scary from my interest in both Mesoamerican history and all of the science I was reading at the time - Dawkins and others, hence the somewhat regrettable monologue of Timebomb which, I feel I should stress, condemns a cultural bias towards quantity over quality of life rather than being the Douglas P style horseshit about bad stock to which it bears unfortunate comparison because I wanted to sound like a hardcase. I'd apologise for the Sol Invictus covers but won't because I still like the songs, despite what I have since accepted to be the unpleasant truth of the source; and even if my versions are a bit John Shuttleworth, I still say my voice is superior to that bellowing noise we once heard coming from the blowhole of the original artist.

The rockabilly numbers may seem a bit mystifying in context - I was going for a sort of back to basics vibe, something as far away as possible from the sort of Wire-reading art gallery shite the rest of this music probably resembles. War Drum was supposed to be folk music, or imaginary folk music, or Muslimgauze eating a taco whilst frowning - something along those lines. Most of the references will make more sense if you have some working knowledge of Nahua culture, (and yes, that would be me trying to sing in Nahuatl on Xochitlacuicatl) although it probably isn't essential. Just pretend it's fake Swans without a drum kit or summink.

Anyway, once I had recorded this masterpiece I got fifty copies professionally duplicated on chrome cassettes by a bloke in Bromley and had a cover printed. I sold a few, gave some away, and eventually got rid of them all. This was in aid of an ideal of producing a cassette tape which didn't look like some half-assed piece of shit, and generally speaking I'm still fairly pleased with this one despite its obvious shortcomings. My biggest mistake was, I suppose, releasing a cassette at a point at which people had more or less stopped bothering with the same, having mostly switched to the greatly inferior medium of CDR.


Download the eighteen tracks, cover, and hilarious lyric sheet by clicking on this link.

Return to Index
Posted by Lawrence Burton at 09:41

Email ThisBlogThis!Share to TwitterShare to FacebookShare to Pinterest
Labels: Do Easy, War Drum