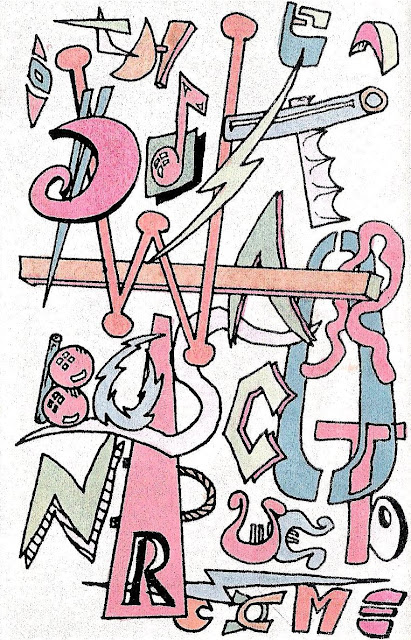 In the fairly unlikely event of anyone having paid close enough attention to wonder, aside from digitising the stuff already available on this blog, I've also been digitising millions of cassettes of material by even earlier bands with which I've been involved, namely the Pre-War Busconductors and others. There hasn't been much of this stuff posted here for free download on the grounds that 1) one former Pre-War Busconductor is terrified of people hearing that which he recorded as a kid and subsequently realising that he wasn't always as cool as he is now - which only works if you have half a fucking clue who he is and accordingly regard him as having been cool at some point, which you almost certainly won't if you know him, so the two kind of cancel each other out. This isn't what he actually said, but it's how I interpret his slightly pushy email describing nebulous fears about how once you put something online it's there forever and people will use it against you.; and 2) it's mostly fairly shit and occasionally massively embarrassing.

So it's always nice when I come across something which doesn't feature the aforementioned former terrified Pre-War Busconductor, and to which I can listen without wincing too loudly; and here's one.

The Post-War Busconductors was my solo work, although Eggy of the Pre-War Busconductors is responsible for the cymbal and coke can effect on Come, whatever that was. The personal computer revolution had not yet quite filled local branches of WHSmiths with those natty little C15 cassettes, but I'd started opening up cassette shells and making my own tape loops and cassettes of unorthodox lengths. Cassette singles had been a thing since Bow Wow Wow did one back in July 1980, so this was an experiment both in terms of format, and as one of the first things I recorded on the twin tape deck of our newly acquired home stereo, which seemed like Abbey Road compared to previous efforts recorded on mono portables.

Come could have been named Come to the Bean Shop but I'd just read about a band called Whitehouse in Flowmotion fanzine so I was experimenting with ambiguous titles. The bean shop thing references running jokes of the time, mostly sourced from Jason Roberts at school whose sense of humour was mostly fried breakfast based. Typically he would insert weirdly incongruous references to toast, fried eggs, or baked beans into his essays, yielding belly laughs all round as they were graded with ticks and well done from teachers who had quite clearly ceased to give a shit about our education. Part of what made fried breakfast based humour so entertaining was that no-one else found it funny, or even realised it was supposed to be; which is as good an explanation of what this song is about as I can manage. Just pretend it's Nurse With Wound or Faust or something.

Jimmy Savile on 45 references the Stars on 45 phenomenon, crappy replayed medleys of hits set to a disco beat, so my version lifted the words of Jimmy Savile from broadcasts of his Old Time Record Club on Sunday afternoons, setting them to an attempted disco beat played on cardboard boxes. We all found Jimmy Savile weird, slightly creepy, and hence funny, which seemed as good a reason as any to record this track. Given recent revelations regarding the man, you could probably regard this piece as sharing the general spirit of all those Whitehouse tributes to assorted bad lads, should you feel so inclined.


Download the cassette single and cover by pogoing on this link.

Return to Index
Posted by Lawrence Burton at 08:25