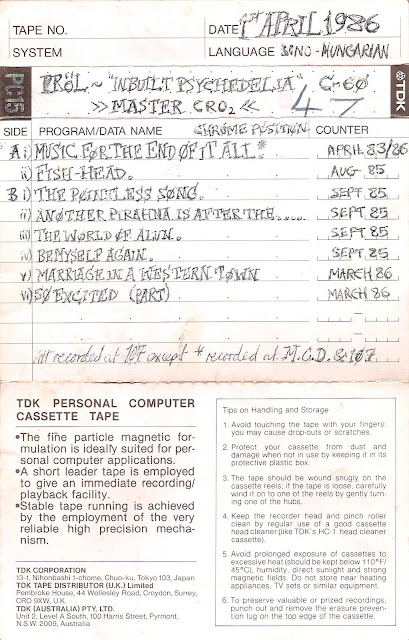 Here's the last I have of Mr. Mercer, another one of those I would have released on my Do Easy label but for being skint and having lost all enthusiasm for underground tapes at the time. I didn't actually even ask for this one. He just gave it to me as a compilation of previously unreleased material, even though I hadn't got around to doing anything about releasing Strange Days, his previous tape. All I can remember is that he'd been recording a tape called On the Beach in the college sound studio - all on TEAC using Eno's old EMS suitcase synth and with a bit of a Gira influence on his vocals, fucking excellent and maybe the best thing he'd ever done, I thought - and that was going to be a Do Easy tape, and then suddenly it wasn't and he gave me this instead, and I disliked the title due to my hatred of Pink Floyd; and then nothing happened until last week when I digitised it, and here we are.

With hindsight, this may be the best thing I've heard done by the man - given that I never had a copy of On the Beach: moody soundtrack or ambient work which pisses all over Lustmord, quite frankly, and does a lot of those things which would allow Nine Inch Nails to buy Charles Manson's old house some years later.

World of Alun seems to have been some sort of dig at the late Alun Jones, the former Apricot Brigade drummer who went on to play with the Dentists for a while. Whatever our boy's beef was, I expect it was most likely unjustified and I actually happened to think quite highly of Alun, so I was going to abbreviate the title to just TWOA or something, but ultimately couldnae be bothered. You can't really make out the words anyway, so I don't suppose it matters.

For more information on any of the artists mentioned above, except for the Dentists, please refer to the index, as linked below.

Return to Index
Posted by Lawrence Burton at 13:01