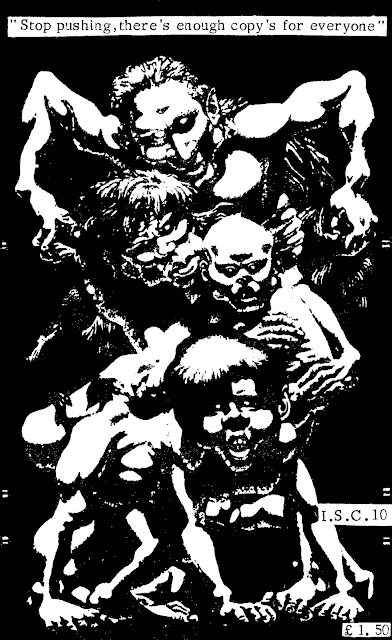 I don't have a vast wealth of knowledge regarding this one, one of a regular series done by Andi Xport who also recorded his own stuff under the name Man's Hate and which was pretty good as it happens. I had more volumes of this at some point, and certainly the first one, but it's no longer anywhere to be found, so I probably gave it to Jim MacDougall back in the nineties when I was having a clear out. I guess I kept this one because I'm on it.

A Split Second and Stress were both quite big, relatively speaking, so you should know of them; I believe Crawling With Tarts had some sort of following too, although I think this is the only thing I ever heard; Ajnynytyv once sent me a tape with a red cover but it was pretty noisy and I don't remember liking it much, so I think that went to Jim McDougall too, probably ending its existence flung off the top of an east London tower block for air rifle target practice or something; Len Liggins also contributed a (slightly better) track to an Unlikely Records compilation which I'll get around to digitising at some point; and I vaguely recall Modern Art, WeR7 and Mystery Plane from fanzines and Color Disc flyers of the time. I never bothered sending for any of their stuff, but I sort of wish I had now. Anything else you want to know, you might be able to find out from the Discogs page, although it's patchy where some of the more obscure artists are concerned.

Weirdly, I've a feeling this may only be the second or third time I've bothered listening to this one, which is a pity as I realise it's pretty decent, with a good variety and some interesting stuff on there. I really wish I still had the other volumes, but never mind.


Download the twenty-eight tracks and cover by clicking on this link.