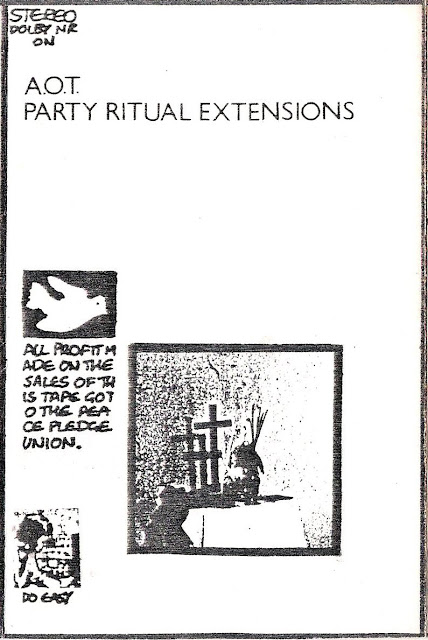 Adventures of Twizzle were Saul Pol Koatep and Jude Wilton Keel, or at least that's how they signed their letters. They lived in Newcastle and were responsible for a series of noisy, low-fi and occasionally surreal cassettes distinguished by application of a well-developed sense of humour. The first one I heard was Hitler's Trousers After the Blast, from which point on I was immediately a fan. They also wrote great letters comprising peculiar flights of fantasy lavishly illustrated with wax crayon. One of my favourite was a postcard, a publicity shot from some old film to which Jude had selotaped a sachet of tomato ketchup and amended with what was either a joke or philosophical inquiry:


A second postcard settled the issue about a month later:


Obvious really. Anyway, Party Ritual Extensions was a live tape they sent me and told me I would be releasing on my Do Easy label, which I did. The performances were two years old by then, but they seemed worth hearing. Listening to them again in 2017, this stuff is a bit basic but it still sounds good to me, and the tape makes for quite a powerful experience listened to in its entirety.

We lost touch soon after this, or specifically they wrote to me and I never bothered writing back. The two of them had apparently been nicked for fare dodging and had a massive fine to pay, so they photocopied a stack of legal stuff relating to their prosecution and asked if I could help them out, which I couldn't because I was a starving student and living on tinned potatoes at the time, so the request struck me as a bit fucking saucy. Then nearly a decade later, Jude saw my name mentioned as a member of Konstruktivists in an issue of Music from the Empty Quarter and so wrote a letter to Glenn explaining that he knew me of old and that I was in the National Front* and possibly also the Freemasons. It turned out to be a joke, just a bit of a wheeze, albeit one of those jokes which seems funnier when you've had your head stuck inside a bong for three days. So we corresponded, and he was clearly abrim with genuine regret at having libelled me for wacky fun-filled chortles, and explained that he had lost touch with Saul and was now a Hare Krishna. There didn't seem to be a lot to say after that.

Saul phoned me a few years later, mid-nineties some time, but it was at three in the fucking morning when I had to be up for work at five and he sounded somewhat off his tits, so I don't recall much of the conversation apart from that I found it heavy going. He'd found my number in an issue of The Sound Projector because I had stupidly included it in an advert for Ce Acatl tapes. He told me he was behind a label called Hypnagogia, of which I had actually heard, and sent me a few CDs and a 10" by Anomali, his most recent musical endeavour; which was nice, and at least better than writing to any of my friends and claiming to remember me having been on trial at Nuremberg.

*: Seriously - what do you fucking think?


Return to Index
Posted by Lawrence Burton at 11:41

Email ThisBlogThis!Share to TwitterShare to FacebookShare to Pinterest
Labels: Adventures of Twizzle, Anomali, Do Easy, Konstruktivists, Music from the Empty Quarter, Sound Projector