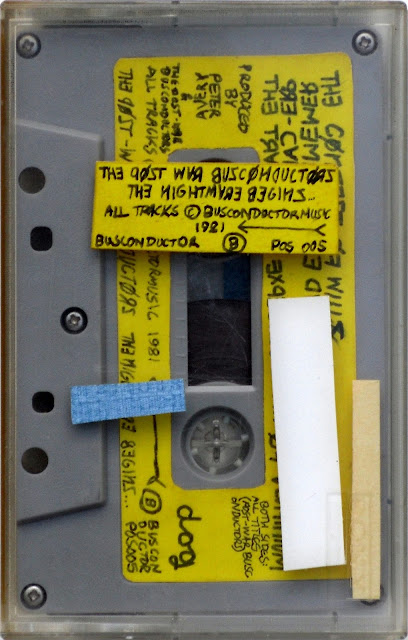 I joined my first band in September 1980 at the age of fourteen. We were called the Pre-War Busconductors. Pooling our resources we had an acoustic guitar, a harmonica, a borrowed semi-acoustic bass, and an Action Man radio which came with a microphone and could be used as an amplifier. We made drum kits up from cardboard boxes and recorded scurrilous tapes of improvised toilet humour songs about people we didn't like at school. After about a year of churning this stuff out in various bedrooms, garages, and even the bogs in the Telegraph Street car park on one occasion, I decided it might be nice to see if I could produce something more serious, or at least something less obviously stupid. I was already recording solo tapes as the Post-War Busconductors, and so that's where this came from. The Nightmare Begins... was never my first album, but it was the first one without bum jokes.

I had heard a little bit of Throbbing Gristle, some Residents, and quite a lot of Public Image Limited, and I wanted to produce something comprising pieces of music rather than songs as such, principally because I couldn't really sing. Whilst I wrote a mean lyric - or so I believed - once beyond subjects such as which kid at school was rumoured to have shagged a chicken, I was less confident and thus elected to allow atmosphere alone to communicate whatever it was I had to say. So I had an acoustic guitar, a cheap electric guitar and amplifier, a knackered toy ukulele found in a charity shop, a recorder, harmonica, two mono portable tape recorders, and that was more or less it, aside - I suppose - from a sort of percussive activity center I had made out of Meccano. I had no means of creating sophisticated effects, and no means of multi-tracking beyond a hissy tape played on the second tape recorder positioned next to the first. My theory was that, creatively speaking, what I did was of greater importance than the technological sophistication of the means by which it was done, and mostly it was a question of judgement - knowing what to do and when to stop, and recording within the limits set by my musical ability, which has never been great.

Aside from girls and their non-availability, I've no idea what any of this was about, although my whistling the march from Carmen would have been a reference to my then recently departed granddad who used to whistle it all the time. Certain musical quotations - notably theme tunes from some BBC motoring show and Noah's Castle - were used probably just because I knew how to play them. Lacking the literary credentials which would have given this work the philosophical weight I felt it needed, I fell back on Doctor Who references (which will be obvious to those who look out for such things), one being the name of the tape. Accordingly, the tune appearing at the end of The March (Nestene) was originally an earworm which came to me years before as I lay ill in bed reading Doctor Who and the Auton Invasion by Terrance Dicks. I would have been about eight, and I still have no idea whether this tune was something I picked up from television, or whether it may even have been an original composition on my part.

So, to summarise, this be some creaky-ass shit, poor quality, kind of repetitive, and with an unusually low point arriving at the end of what was originally side one when I start singing - comically obtuse lyrics in a voice which can't decide whether it wants to be Bowie or Numan, but not so loud as to draw the attention of my mum who was probably in the kitchen making my fish fingers at the time - but now that I've listened to it again, after a break of about thirty years, I think fuck it. It may be piss-poor shite, but it's my piss-poor shite, and is as such still superior to the entire careers of In The Nursery, Porridge, Skinny Puppy, whoever is on the cover of The Wire this month, that bloke from Ministry, and his mate - that drummer, the one who has been in every single industrial rock band ever at one point or another. Even though The Nightmare Begins... failed, I was only a sodding kid for Christ's sake, and at least I tried; and I'm still pleasantly surprised by how the last track actually sounds okay, like it happened on purpose, so screw you!!!

Download the ten songs and cover by clicking on this link, if you're feeling brave.

Return to Index
Posted by Lawrence Burton at 06:05