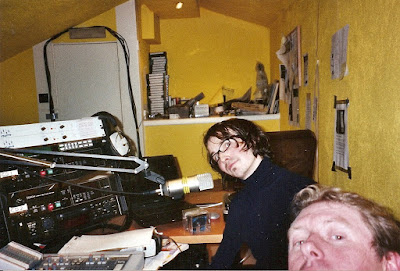 This week's free shit will probably be of limited appeal beyond my wife and anyone who was actually on the show, but it's a recording of a radio broadcast: You Are Hear presented by Jim Backhouse and featuring me as a guest, plus a live session by Noxagt, which went out on Resonance 104.4FM back in October 2003. Jim invited me on to play a load of Mexican stuff and then attempt to form sentences giving account of the same, which was more difficult than you might think. So I suppose you could call it a podcast, if you really want, despite the lack of quirky ukulele music.
It's here on my blog because I am very, very vain, but also because the music is mostly worth hearing, and Jim put on a good show. This is as much of the show as would fit on a hastily located C90 at the time, so it's not all of it, but it's probably as much as you need (and is in any case as much as I have). I've glued the end of side one to the beginning of side two so as to allow for continuous play as a single track, and I haven't broken up any of what Jim played into individual tracks because that would be fucking stupid.
I'd like to think that I'm a bit more able to string a sentence together these days without all the mumbling and gasps of exasperation as I labour to recall even the simplest, most obvious words, but my more recent performance on the Raconteur Roundtable podcast shows that this simply isn't true. Oh well. Hopefully you can get something from this regardless. There were a couple of digital glitches here and there, but I've kept them because I'm lazy and I think they were part of the show, and ANYTHING CAN HAPPEN ON LIVE TELEVISION. That's also me you can hear asking whether everything is okay immediately following Noxagt accidentally eating their own drum kit during broadcast. They were playing in the studio downstairs, requiring that I go down and check that no-one had actually died, which thankfully they hadn't. Crazy times.
Featured music comes from Hanatarash, Kovert, Palais Schaumburg, various unidentified Zuni and Tepehuano musicians, Delfino Guevara, Antonio Zepeda, Tribu, Noxagt, Ceramic Hobs, the Noblemen, DJ Tranquilizer, UNIT, War Drum, and one other whose name I can't work out.


Return to Index
Posted by Lawrence Burton at 14:52