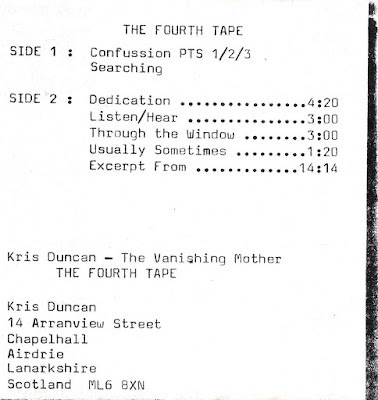 Here's the other Chris Duncan tape, as referred to when I wrote about The Broken Crucifix; and more or less anything I can say about this one has already been said about that one, so follow the link if you need to know more - not that I actually know much about this guy or his tapes. I'm not even sure that this was from 1981, but am guessing that it is mainly on the grounds of the other one being from that year. If you already downloaded and listened to the other tape, you'll already know not to expect Front 242 produced by Martin Hannett. This is similarly basic in terms of recording and composition, although there seems to be more multitracking and even a sample of Mr. Duncan's poetry, and the enterprise is not without a certain charm.
Whilst digitising this, I remembered (for no obvious reason) a stack of tapes I got sent back in the nineties, all destined for review in Ed Pinsent's Sound Projector, by a vaguely noisy DIY tape label of some lasting repute run by a noise bloke who is still treading the boards to some acclaim (mostly deserved) right now. I don't remember being massively impressed by the selection of stuff, but the worst was a thing called Thinnest Guitar Ever which seemed to be someone attacking an acoustic guitar with a screwdriver for twenty minutes, recorded on a truly shit tape recorder. It probably remains the most pointless waste of time I've ever heard in the name of art, and I personally would have been frankly fucking ashamed to have accepted money for it (and I say this in full knowledge of how shite some of the stuff I released was). Anyway, my point was that, for all his sonic shortcomings, Chris Duncan's work is still about a million times more interesting than the aforementioned improv noise wank. So there.
Not sure whether Confussion is so titled because Mr. Duncan couldn't spell or it's actually clever wordplay. What do you think?


Download the nine tracks and cover by clicking on this link.