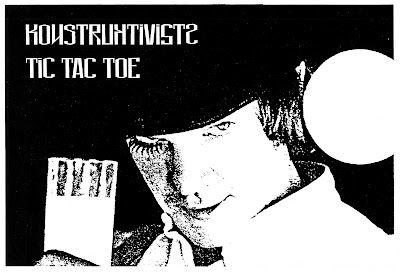 Konstruktivists had recorded an album for World Serpent and somebody or other suggested the possibility of there being a single from the album, which was all very exciting. I hit the photocopier and put together the artwork for what would definitely be our first twelve inch single whilst Joe hit the studio and remixed the shit out of Tic Tac Toe, the track which everybody seemed to regard as representing our best chance at knocking Cher's Shoop Shoop Song and Colour Me Bad off the top of the hit parade. Then suddenly everyone realised that vinyl was rubbish, and that no-one would ever buy a vinyl record ever again, and the thing was downsized to a CD single which I would have to take around to somebody's house to listen to for at least the next five years. Oh well. It was still better than a kick up the arse I suppose.

Weirdly, I find that twenty-five years later, persons on facebook are still listening to Tic Tac Toe, which is nice; and so I am prompted to dig out this cassette of ten mixes crafted by the technologically adept hand of Joseph Ahmed. Some of these turned up on the CD single. I can't be arsed to work out which, but unless you were in Konstruktivists in 1991, you probably won't have heard at least five of these. I wasn't sure what to make of these mixes at the time, but with hindsight Joe did a great job, and I only regret that one of the trancier versions didn't end up as a slab of vinyl being played into a flexidisc and getting rewinds and all that in the super hot Tropicana acid disco house clubs of the day. Seriously, I think this lot would make for a very listenable double vinyl set if anyone feels inclined to think about that one for a while.

Whilst we're here, I should probably point you in the general direction of Joe's more recent work which can be downloaded from this bandcamp page.

No cover as it was just a boring inlay card, I'm afraid. The Alex pic comes from a promotional postcard we did around the same time.


Download ten of these super hot disco extended twelves by clicking on this link, baby.

Return to Index
Posted by Lawrence Burton at 09:54