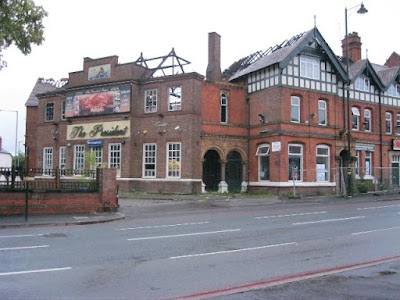 I found this picture of the venue on Google, apparently taken the day after the gig. Whitehouse weren't fucking about that night, let me tell you. I'm presently sorting out all the digitised music files on my PC so as to free up space for more material which will eventually be shared here (in case anyone was wondering). In the meantime, I found this. It was originally part of a catch up blog post (scans of fanzines, FLAC files etc.) because it's only about five minutes long, which I'd reverted to draft for the sake of keeping everything tidy. Here's what I wrote back in 2017:

This left me with nothing much to post, so as it's been a Death Magazine 52 kind of month - what with the Family Patrol Group material I posted a few weeks ago, and Mike Grant of the same commenting, and my getting hold of a copy of their excellent retrospective double album released by Harbinger a couple of years ago - I figured I may as well digitise my tape of the Death Magazine 52 performance from when they appeared on the same bill as Whitehouse and Family Patrol Group at the Mermaid in Birmingham back in 1983. I don't recall D.Mag 52 / SHC being particularly amazing that night, certainly not compared to Family Patrol Group, but it seemed like the tape should be of interest to someone. So I digitised it and immediately realised why they had seemed so underwhelming: they played for about six minutes and knocked it on the head, so it's really just a track rather than a live gig. The evening is described in more detail in the Family Patrol Group post, and I therefore gather that whichever two - or maybe it was three - of the Death Magazine 52 collective had turned up to play that night must have felt as though it had been a mistake and pulled their own plug or something. It's a shame really. There's a tantalising burst of rhythm about half way through the track (which I don't remember at all from the event itself), hinting at the kind of material I've heard more recently on the Harbinger album, but I guess it just wasn't happening for them. Anyway, if you're interested, this was Death Magazine 52 briefly live at the Mermaid, Birmingham on the 27th of August, 1983.

While we're here, you might want to take a look at this.
That's all for the moment, I'm afraid. I'll be back when I've sorted more of my shit out.
Download D. Mag 52 at the Mermaid by clicking on this link.
Return to Index
Posted by Lawrence Burton at 14:59