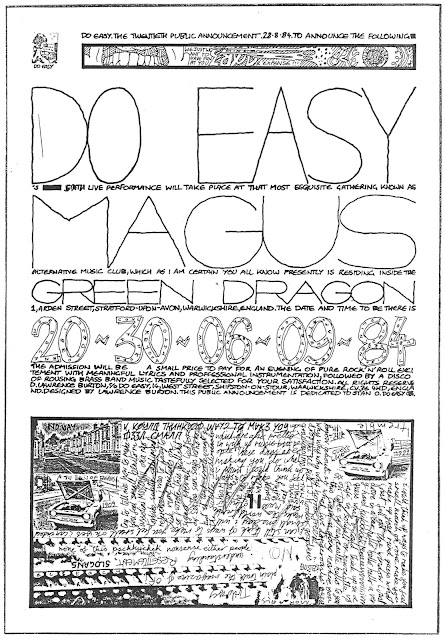 So I'd started at Maidstone College of Art and had already been insulted by Traci Emin. I'd successfully gained entrance to a nude female lady of the opposite sex, at the same time pissing off my oldest friend who had been labouring under the illusion of her being his bird - as described in more detail here; and then in a display of irony so massive that interstellar travellers could have settled on it and started a new life, she'd dumped me for some fanzine bloke. I wasn't a happy bunny by any description of the term. Worse still I seemed to have mislaid what I regarded as my musical mojo. The tapes had dried up. I'd recorded a few things but the complete change of surroundings combined with my discovering pubs had proven confusing. Additionally, I think I may have begun to realise that my Do Easy material wasn't as amazing as I had originally thought, so I had grown frustrated with my inability to produce anything which still sounded all right the next day. Partially this was because since The Fourteenth Metal Tape and the er... singles, I'd put out a compilation, was working on a follow-up, and had also released tapes by Opera For Infantry, Trilogy, Sin, Acrobatic Champions, and Adventures of Twizzle, all of which even I could tell made my own stuff sound amateurish and poorly realised.

Anyway, by 1985 I had vaguely enough new material for a full C60, and this was it. The live recording from 1984 was mostly improvised by myself with Henry Probert and Dave Browning of the Shining, and improves substantially once I've got the pound-shop William Bennett out of my system. Dave and Henry came over to my house in Shipston the week before and we'd worked something out together, and it ended up sounding like this. The remaining tracks are a mix of things recorded as soundtrack material - a fuller account of which can be found here - and generally disappointing attempts to recapture the Do Easy magic of yesteryear. I was miserable, but not very good at articulating it without sounding ridiculous - although I still quite like What's the Fucking point?

This ended up being the last Do Easy tape I released, the last for which I did a (presently missing) cover and which I sold to anyone through the post. I continued to record music as Do Easy, particularly when in the second year of the course I was granted access to the college sound studio, and although I always intended to sell tapes of that stuff, I'd stopped caring about the tape label by that point and never bothered.

This one's some way short of a masterpiece, so download at your peril. The one thing in its favour is that it almost certainly sounds worse to me than it will to anyone else.


Download the full hour of unrelenting misery by clicking on this link.