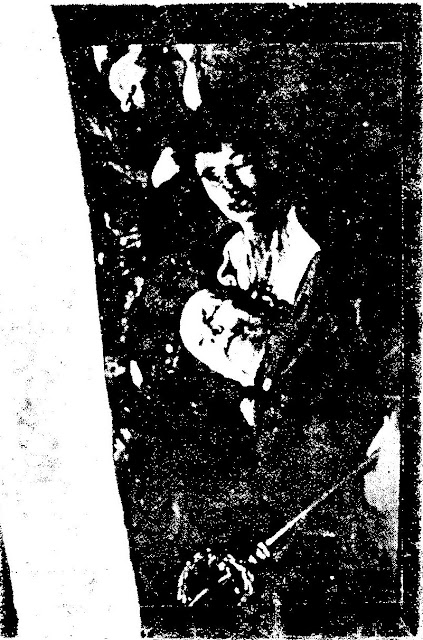 Death in a Milan Square was my live album, as distributed by Anal Probe Tapes - the label set up by Trev and Dap of Opera For Infantry who eventually became the Grey Wolves. I'd released their Hopscotch and Scumworld tapes on my label, and Trev kept asking if I had anything he could release (or at least he mentioned it a couple of times, just in case it sounds like I'm trying to give the impression of my being some kind of hot property). I sent him this cassette of two live performances because it seemed more like the sort of thing he would be into adding to his catalogue. The material was fairly noisy - unusual for me as I spent at least some of 1984 apparently trying to sound like Haircut 100. Trev came up with the title and the cover in reference to my interest in Mussolini and Fascist Italy, which had come from my interest in Futurism and was - seeing as it apparently needs spelling out - largely historical with just a pinch of pleasure taken in upsetting people, and also the fact that I find bald, fat men fairly amusing, especially when they're angry.

The live performances were both held in the afternoon in the sculpture studio at the Mid Warwickshire College of Further Education, Leamington Spa, because I was on the art foundation course at the time. I'd done a couple of performances back in November, 1983, basically just abusing the audience and calling it performance art. This was an attempt to do something similar with a vaguely more musical element, or at least something I might be able to get away with doing in a pub before a paying audience.

The first set was on Thursday the 28th of June, 1984 and featured Jez Diston on guitar, with Graham Pierce and Stephen Webb of the Pre-War Busconductors on fashionable metal percussion. The shouting, electronics, and tapes were all down to me, except I was too pissed to really get anything together - having medicated my pre-gig nerves with a lake of lager down the Star & Garter. I borrowed an amplifier from Jon Hunt of the Ideal Husbands which I think I somehow managed to blow during the proceedings, which was a bit embarrassing, but only for me as I think most of the audience fucked off after the first five minutes.

The second set - performed because the first had failed to resemble the power electronics tour de force I had hoped it might be - was on Monday the 2nd of July, again with Jez on guitar, but with Dave Browning and Jim something-or-other of the Shining pounding the scrap metal. My diary commemorates the occasion thusly:

I spent the morning setting up all the equipment, then got some booze at dinnertime. Jez arrived after that and we had a sort of rehearsal and got drunk. At three we put on another Do Easy live performance, which seemed to go well and was enjoyed by all. We had some great percussion from Dave Browning and the other guy out of the Shining. I borrowed an amplifier and delay pedal from Dave Hirons. I am very pleased with the results and feel a bit randy.


No, I don't know, although there was probably a good reason given that I was eighteen at the time.

Both of these sets were captured on VHS video by Tim Griffiths - who can be heard asking Alan Partridge style questions at the end - and the sound was taken from the video recording. The videos still exist, but aren't that interesting even to me, and I can't be arsed to pay a million dollars to have them converted to a YouTube friendly format. Trev's cover suggests sets comprising individual tracks, following my admittedly vague plan for how each set should progress prior to performance, but it all sort of went out of the window in recording, so each set has been digitised as a single long track - also, the original C60 release chopped off the end of the first set which it then continued on side two, so I've stitched its tail back on, so to speak. The final track is Trev trying to flog other tapes from his label just like that Victor Kiam with his razors, and is included here as a snapshot of the time.

We did it all again on Saturday the 15th of September at Amesbury Sports Centre supporting the Subhumans and Opera For Infantry. 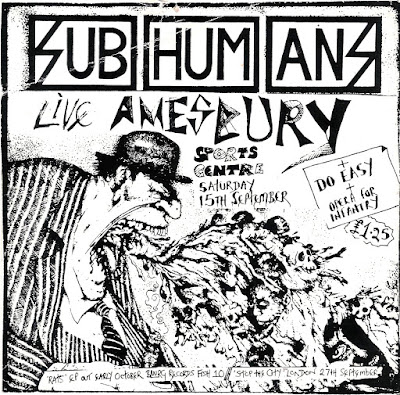 I seem to recall playing more or less the same set, but getting it right. I also seem to recall Jez being there except he isn't mentioned in my diary, which states:


Today I started off depressed for no reason I know of. At one point I was in tears but I still don't know why. Me, Grez and Anders went to Amesbury and met Opera For Infantry and their pals, that is Trev, Dap, Charlie and others. Then we played live at the Sports Centre. We also met the Subhumans and a lot of nice punks, one of whom gave me a go on his joint and said my set wasn't too bad. The Subhumans were good people, especially Trotsky and the guitarist whom I also spoke to, and Dick as well. Opera For Infantry were really good live. It was a really good day.


I'm pretty sure Charlie - whoever he was - handled the guitar for me. I'm not sure what Grez or Anders did but I suspect they were concentrating mainly on their drinking. Unfortunately no tape exists of this performance, so let's just assume it was fucking amazing, unlike the shite you've probably just downloaded. Winky face. Winky face.

Download the tape and cover by clicking on this link.

Return to Index
Posted by Lawrence Burton at 07:49