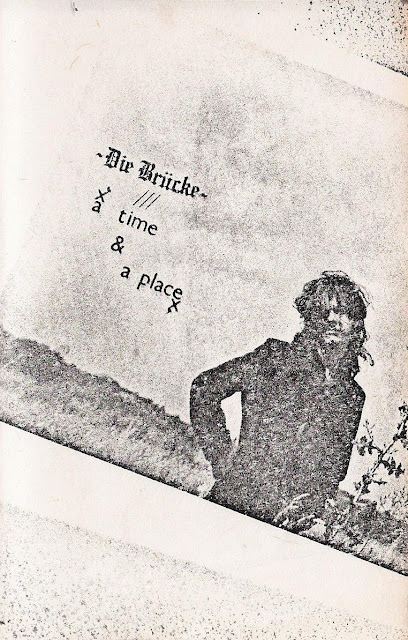 Here's another one I actually haven't asked permission to offer up as a freebie on account of the fact that I fell out with the bloke, or he fell out with me, which is probably a lesson in the shelf-life of friendship. Sometimes there's a reason why you lose touch with people.

Anyway, Die Brücke was Paul Mercer of Apricot Brigade - whose work can be found elsewhere on this blog - plus Sarah, his girlfriend of the time, playing an SH09 synth. The cassette was just a compilation he made for me, I gather, hence the last minute inclusion of an Apricot Brigade track I don't actually remember having heard before (I guess it's been a while since I played this) which must surely date from 1985 if not a little later. I remember him joining Apricot Brigade, and I didn't meet him until September 1984. Anyway some of these tracks he recycled as Apricot Brigade material - notably Trust and Prove Myself to You. Some of them he may even still be performing now as part of his one-bloke-on-stage-with-guitar-and-a-copycat thing. I don't know.

Anyway fuck it - regardless of anything, I still say this material speaks for itself. Paul Mercer should by rights have ended up churning out one album after another and been sickeningly famous as a result. This was post-punk just before some clown decided it was goth, and it pisses over most of those comedians you find on the Mick Mercer compilations. Quite frankly I would have given my left one to have written just one song as good as Watching from Outside.


Return to Index
Posted by Lawrence Burton at 12:04