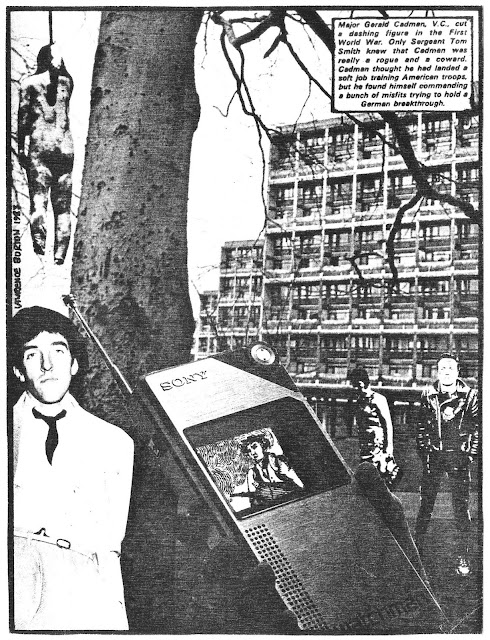 I knew this one was going to be tough going, but I didn't realise it would be quite as bad as it is. I'm probably not even going to bother leaving the usual links on Twatter and Arsebook. Download at your peril.

With hindsight, the problem was my delusional graduation from noisy sound pieces such as Le Cœur à Gaz - which was named after a Tristan Tzara play and is probably the best thing here - to things I considered songs because they had tunes and deep, meaningful lyrics. It didn't really occur to me that my voice was whiny and unpleasant, and my lyrics weren't anywhere near as weird or interesting as I imagined them to be. Neither did it occur to me to re-record things so as to make them less shit than they turned out on first attempt. Oh well.

If The Sixth Metal Tape was my media album - which it wasn't - then this was probably my sexuality and fear of molestation concept album, or something. I vaguely recall finding the bloke in our local chip shop a bit creepy and deduced in my teenage wisdom that he was probably a kiddy fiddler, which he almost certainly wasn't, and so some of these songs were about that. At the same time I was developing a weirdly puritanical attitude in response to kids at school going on about Mad Max and how it's great when the bloke rapes all those women - or something along similar lines; and then there was Second Brain Product which I have a sneaky feeling may have been about having a wank, and distancing oneself from the act so as to appear less like a pervert to the girls who would then be more likely to let me have sexual intercourse with them. Ironic really, when you consider the old bloke in the chip shop was effectively giving it away and probably wouldn't have required the preliminary box of chocolates. There are also a number of references to Mussolini because why the fuck not?

What the hell was I thinking?


Download this fucking crap by clicking on this link.

Return to Index
Posted by Lawrence Burton at 09:44