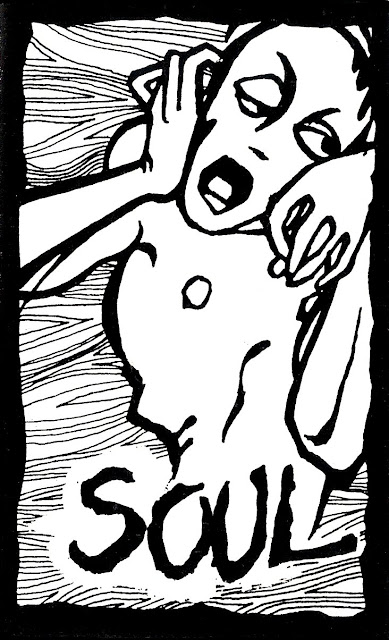 Soul comprised Karl on vocals, Martin and Terry playing guitar, Min on bass and my friend Charlie Adlard on drums. I don't remember the surnames of the first four and didn't think to ask, although in any case people can sometimes be a bit funny about the past - shameful or otherwise - turning up on a website after twenty years, as though the simple acknowledgement of once having existed in some form will immediately transform your bank account into a playground for unscrupulous Nigerian gentlemen. I remember Charlie's surname because we were friends at Maidstone College of Art, and even were this not the case, he's difficult to avoid due to having become the third most famous person in the universe (behind Donald Trump and Bob Carolgees) as artist of The Walking Dead.

Anyway, Charlie and Karl were originally in a Shrewsbury based band called the Magic Roundabout, and - oh fuck it. I may as well just quote what Charlie said:


Soul was kinda formed from the Magic Roundabout - only in the fact though that I was friends with Karl and we were in that band together in Shrewsbury on the art foundation. Then he moved to Worthing and met the other guys. I joined after those four got together. After Soul ended, it was just Karl and Terry who moved to London. The other two stayed behind, and I joined them after completing my degree. And IF was formed with new bassist Ben…


I had forgotten about IF, Charlie's later band, until he mentioned them, although probably because I never saw them live. I have a vague memory of staying at their shared flat one night somewhere in north London, having travelled down from Coventry for the UKCAC comic convention, which is probably neither here nor there.

I saw Soul a few times, and Total Big - for whom I played guitar - supported them on at least one occasion, some pub in Worthing and possibly also something or other at the art college. They were a big, wide-screen rock band, as bands involving Charlie have tended to be, and they were terrific, and somewhat wasted on an art college audience which didn't really mind what you played so long as at least one of the band had a flat top and was wearing one of those German military issue vests like people from muscular Sheffield-based funk bands. One of the first things Charlie and I turned out to have in common was a shared appreciation of Simple Minds, even the stadium-filling stuff you're probably still not allowed to like in certain circles, and Soul therefore sounded pretty damn great to me. The only thing missing from this unfortunately short demo was Raphael, which I vaguely recall as having been one of their best songs.

Whilst we're here, I should probably mention that Charlie is still very much at it, and these days occupies the drum chair - as we musicians call it - for the Cosmic Rays. Their album is available in all sorts of formats here, and is a cracker.

Return to Index
Posted by Lawrence Burton at 06:33