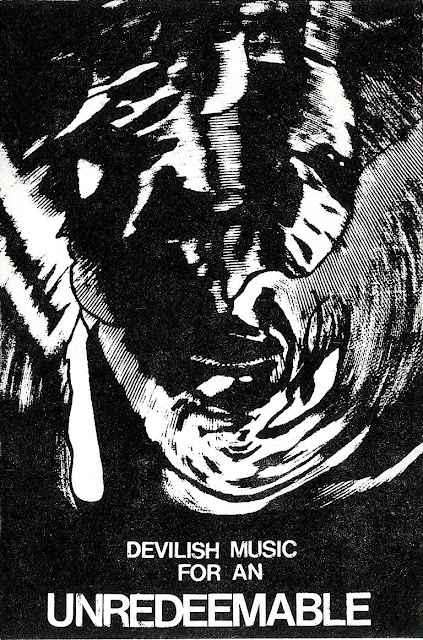 I have no idea - some Swedish bloke called Stalker apparently, and my guess is that he probably wasn't averse to the occasional spot of the Gristley Throbbers whenever Dave Lee Travis happened to spin one of their songs on the wireless. My other guess is that Stalker probably wasn't his real name. I vaguely recall sending Lennart Eilersen of Selbstmord Organización some crappy tape of mine and suggesting he send back whatever he had laying around as a swap, and so I ended up with this, which wasn't actually on Lennart's label, but I guess he knew the guy because he's thanked on the tape. Of course it's potentially a bit of a political minefield offering up this sort of blatantly industrial obscurity given that most of the fuckers seem to have ended up as Conservative politicians or worse, so for all I know this bloke may presently spend his day banging on about the dilution of the white race by impure stock (etc. etc.); but let's hope not, and if so, sorry, I looked high and low but drew mostly blanks.

I use the term blatantly industrial for reasons which will be obvious once you listen to the thing - harsh noises and what Sir Kenneth Clark would almost certainly have described as a beastly undercurrent in the lyrics, which probably isn't too surprising given that Charlie and My Double were originally poems written by one of those serial killer types, and I wouldn't bother looking the guy up on Wikipedia because it's all characteristically disgusting. Obvious reservations aside, I remain surprised by how good this one sounds regardless of it having worn its influences so blatantly on its sleeve, and it probably helps that Chrome must surely have been significant among said influences.

Finally, I did what I could with the original tape, but there's some drop out in one channel for a few seconds during a couple of the tracks, and it was beyond my powers to fix it. Hopefully it shouldn't spoil your enjoyment.

Download the seven songs and cover by clicking on this link.

Return to Index
Posted by Lawrence Burton at 07:50