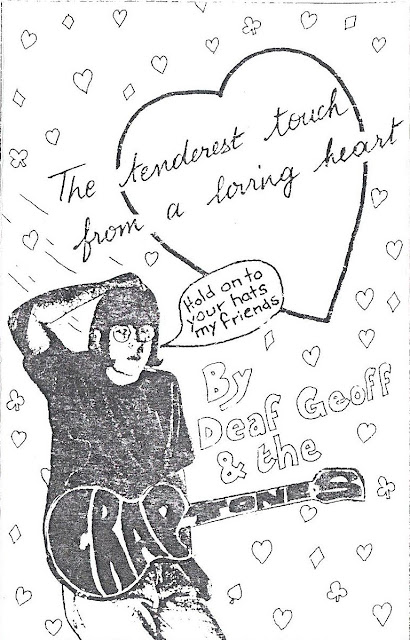 The previous Craptones tape seems to have gone down fairly well with a few of you, so here's the one that came after. It's the same sort of deal as the first one with sarcasm and chuckles aplenty, and beautifully recorded, this time tearing through all sorts of musical styles including death metal (or deaf metal, I suppose), synthpop, house music, acid jazz, and whatever the hell they felt like on the day. Extra points are awarded here for the live track which is actually just the boys at some karaoke evening, a move requiring the sort of balls that the likes of Bono and that bloke from Coldplay could only dream of; and there's Funky Monkey, which is just fucking brilliant.
If you didn't like Hi, I'm Geoff, you probably aren't going to like this one much either.
In this age of downloads, stuff recorded direct to your telephone, arsewave, and moonpunk, I'm not sure acts equivalent to the Craptones are still a thing, so if that's the case - screw you, younger generation. You're doing it all wrong.

Return to Index
Posted by Lawrence Burton at 13:41

Email ThisBlogThis!Share to TwitterShare to FacebookShare to Pinterest
Labels: Craptones