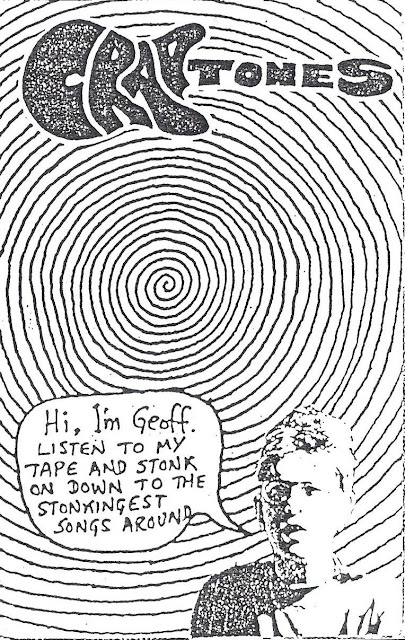 The Craptones were something to do with the Stepping Stones, who released one wonderful garage rock 7" before vanishing back to the cave from which they came. I'd say I don't know much about the Craptones but that isn't strictly true. I actually know plenty but their spokesperson, the one whom I asked if I could gives this tape away for free to online strangers, said he would prefer to keep it anonymous, so if you want to think of this as obscure, early material by the band which would eventually become Coldplay, Mumford and Sons, or Pharmakon, then be my guest.

What I will say is that the Craptones came as a breath of fresh air at the time, but for the suggestion of slightly beery farts. It was nice to hear something with a bit of a tune, which had been fairly well recorded despite being an exercise in taking the piss, and which actually made me laugh, and still makes me laugh, not least the deeply moving, come on, baby, light my flame, I'm so glad you're not on the game. If that ain't some seriously romantical shit right there then I don't fucking know what is. Some of this stuff is kind of offensive, as you might expect of a band who recorded a tape as Dr. Buttfuck & the Anal Intruders (which I stupidly gave away at some point), but I nevertheless find it funny because I'm five years old.


Download these nineteen tracks and their cover by clicking on this link.

Return to Index
Posted by Lawrence Burton at 08:56