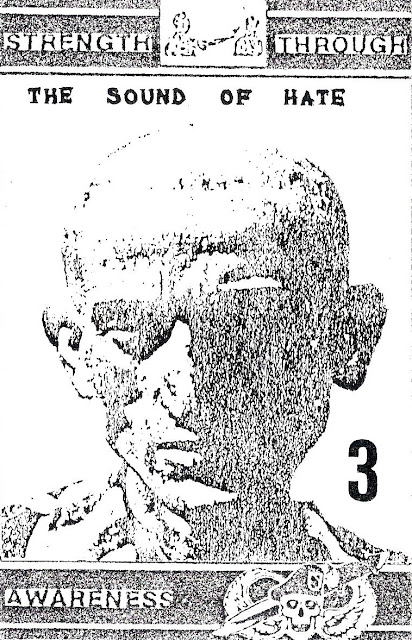 Please refer to previous posts if you're still working on the assumption that the Grey Wolves were actually a Combat 18 recruitment tool as opposed to, you know, just ramming it right down our throats in the hope that maybe we might wake the fuck up. Cheers.
The Sound of Hate was a series of five (to the best of my knowledge) compilation tapes issued by Trev in the early nineties, of which I have just two volumes - this one and five which I'll probably post next week. What surprised me the most about this one, having dug it out of the pile and slapped it in the deck, is that the general sound is a lot more varied than you might expect - plenty of noise, but other elements too, which makes for genuinely unpredictable and exciting listening in my book. Most of the tracks appear on the tape without breaks, so presenting two continuous blocks of sound, and I've more or less edited it in keeping with this ideal rather than inserting the two seconds digital silence at the end of each track as I usually do. This also means that in a couple of cases I found it difficult to tell where certain tracks ended, giving way to something else, so hopefully my application of titles matches the actual material. If not, blame Trev back in 1991.


If you've read this far, I'm assuming you will be at least as familiar with a couple of these names as I am, thus saving me the effort of introductions or explaining how one might use the internet to look stuff up on Discogs. We all remember Pessary and factor X, don't we?