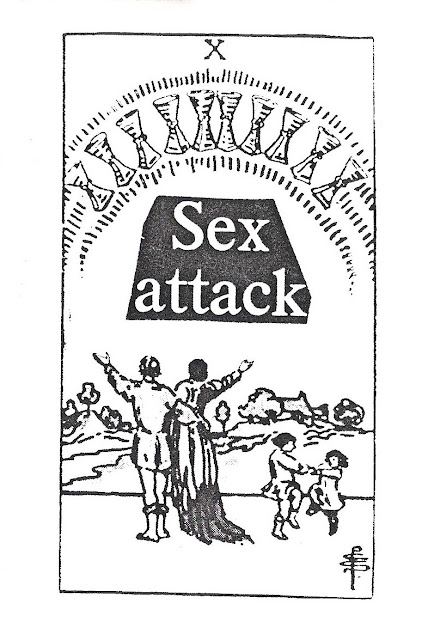 This was Dead Hedgehog's first compilation tape, a wonderfully tuneful collection of punk, pop, and post-punk serving as a time capsule to where some of our heads were at in 1980, particularly if you were living in Watford, which I wasn't. Regular readers will probably know who Mex is by now, and this is one of his. Furthermore these files were kindly supplied by the man himself and as such are therefore better quality than what you probably would have heard had I digitised my copy of the tape. You can read about the individual artists on the cover, as included with the download - an entire A4 sheet scrunched into a cassette case - which I remember finding quite annoying at the time; but I suppose a few additional words might be in order.

Exhibit A really should have been huge, but never mind; Soft Drinks still remain one of my favourite things ever; this version of the Bears' Motoron seems to be a sort of weirdy Copycat echo remix - Tigerbeat records put out a full length retrospective vinyl album back in 1986 with an (I think) much better version of the song, which is well worth grabbing if you happen upon a copy; as for the Steam Settee, I assume you all recall Nikki Sudden from the Swell maps, yes? ; and these Fire Engines seem to be an Exhibit A offshoot and as such are nothing to do with the Scottish band of the same name. I don't know what else to say about this bunch other than that I still find it mystifying that Dead Hedgehog never ended up a household name, which I suppose is testimony to the power of payola over a good tune, or something. Listening to the Traumatics, or the Notion, or the Garden, or Exhibit A - I don't know about anyone else but I have to remind myself that no, I didn't see them on Top of the Pops banging out 50:50 or The Signs Were Sure back in 1980, even though it feels like I should have done, especially considering the shite the rest of you were buying at the time.

While we're here, I should probably mention that Mex has a new album out, so you know what to do. Details at Mex One.


Download the twenty tracks and cover by clicking on this link.

Return to Index
Posted by Lawrence Burton at 08:45