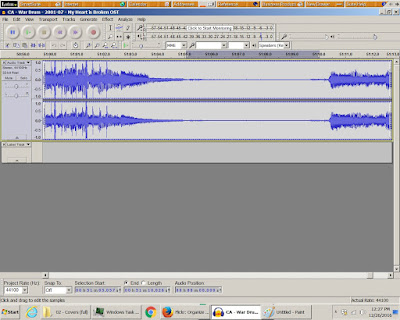 Here's another one which never came out as an actual tape, or as anything. The full story of the major motion picture that would have been My Heart is Broken has already been told here - starts on paragraph eight if you can't be arsed to read the bits which don't directly relate to south-east London's answer to Orson Welles. I recorded five tracks according to Paul's description of what he was after, and he said they were amazing, then next day he said they weren't amazing and could I make them a bit better? He lacked the vocabulary to describe what he considered would make them better, so I just remixed them and added a theme song. I don't even remember what happened after that, so probably nuffink innit.
I recorded this material on a four-track in February, 2001 and I'm still reasonably pleased with it. That said, it's a bit hissy, and for some reason I could never quite get the bass sounding right. It seemed to be in tune and yet somehow felt like it wasn't, but I could never identify the problem. The bass was purchased from Kingsley, star of My Heart is Broken, for thirty quid, so there was probably a reason why he sold it to me so cheap. Otherwise I still say Paul should have been kissing my ass for taking the trouble to record this stuff for a film which existed mostly in his head.
Yes, I am indeed a big fan of The Sweeney.

Download the fifteen tracks by clicking on this link.

Return to Index
Posted by Lawrence Burton at 10:53