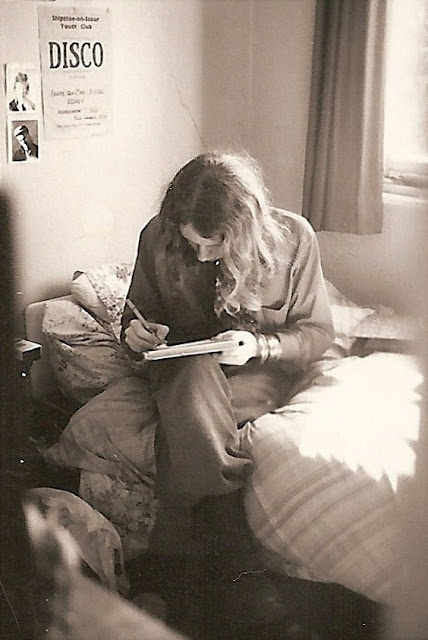 I was eighteen-nineteen and I'd just left home, moving from Warwickshire to Kent, so the title was intended to invoke the bold spirit of adventure 'n' shit, and particularly because this was the first Do Easy tape recorded entirely in a county other than the one in which I was born. It was also the first Do Easy tape for which I never got around to making a cover and flogging to strangers through the post. I recorded it, gave it a name, wrote on the inlay card, and stuck it in a box with the rest; which I suppose might be a shame given that it was arguably better than at least the previous five or six tapes I'd turded out under the assumption of quantity and quality being more or less the same thing - not saying it was a classic, but it definitely wasn't quite as shit as some of them.

At some point during the recording of this tape (May 1985 to January 1986), Thomas Docherty of Trilogy (whose tapes I also released on the Do Easy label) came to stay at the house in Leeds village for a couple of days. We spent a lot of time talking about recording and I picked up a lot from him, not least multitracking tapes so as to produce the echo effect heard on Wrist Job Alley. I think the title of Tom's Kitchen - which was recorded in the kitchen at Hollytree House in Otham - was some sort of acknowledgement of his influence. Also around this time I started to make use of the sound studio at Maidstone College of Art (at which I was taking a degree) which had a four track TEAC and a ton of relatively fancy equipment - not least being Brian Eno's old EMS suitcase synth. Let the Bayonets Speak!, had I ever finished it, would have been the first Do Easy 12" single - or so I had decided. Obviously the plan never came to anything because I was unable to generate money, or even to not spend it on records, which is probably for the best given that I was simply exploring controversial ideas and images in borrowing the title from one of Benito Mussolini's zingers.

The multi-talented Steve McGarrigle programmed the rhythm on Let the Bayonets Speak!, it being his Yamaha RX15, and also for the live set at the Good Intent in Rochester, for which he additionally played trumpet and possibly some keyboard too. The live set came about because Paul Mercer of Apricot Brigade was booked to play a solo set under the name of the Acrobatic Champions - himself with a backing tape, guitar, and a load of effects. He asked if I wanted to support and I said yes. I recruited Steve and Peter Jones and between us we worked out a rough framework around which to improvise on the night, which is what we did. It probably wasn't the most amazing night anyone ever had seeing a band at the Good Intent, but we enjoyed ourselves and that's the main thing. I think Steve later became some sort of jetsetting DJ producer type and he has a couple of releases listed on Discogs as Saturnalia.

The chorus of Bayonets was shouted by Steve McGarrigle, Melissa Darvall, Peter Avery, Mark Enright, Garreth Roberts, Jon Storey, and Nick Scullard. The rhythm on Something In Me Isn't Right was programmed by Paul Mex, and the rhythm you can hear intermittently on Tom's Kitchen is from a tape Stephen Mallinder of Cabaret Voltaire made for Kevin Thorne of We Be Echo and which Kevin kindly copied for me. One of the loops used on Tom's Kitchen was recorded by Nicola Percy, I seem to recall.

So there you go - as with most of my stuff, the tape suffers from terrible teenagery lyrics inspired by my continued failure to have sex with girls, and a general approach to music production amounting to fuck it - that'll do, but for the most part I'm still able to listen to this one without too much wincing.