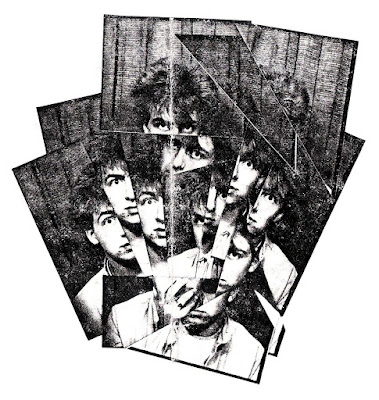 Asepisis was Jez, actually my oldest friend on the grounds of my being told to sit next to him on my first day in Mrs. Daglish's infants class. We both ended up at the same comprehensive school and discovered Throbbing Gristle and related weirdy music artistes around the same time. Once I'd worked out how to layer sound on the twin tape deck of the family music center, it made sense to invite Jez over to see what he could come up with. We had already collaborated to some extent when he played guitar at a Do Easy performance which ended up on Death in a Milan Square, but this was to be his own thing seeing as he already seemed to have plenty of ideas. He came over to my place a few times and vanished into the spare room at the top of the house where we kept the music center, and I left him to it. At one point he had me shout Mishima into the drum of an old washing machine he'd brought over, but that was otherwise the full extent of my involvement.

Annoyingly, given that I actually knew how to play an instrument and everything, The Glory of Punishment sounded significantly better than anything I had myself recorded on the same equipment, and listening to the thing now, I'm still not sure how he achieved some of those sounds given our limited resources. When I recently got back in touch with Jez to ask him about this tape, he described it with typical humility as low rent, fourth grade power electronics, but I think he's doing himself a disservice. The tape is certainly of its time, as they say, but let he among us who hasn't contrasted a tape of Charles Manson talking with a wall of screeching noise cast the first stone. I've heard a lot of power electronics over the years, and quite frankly this tape still sounds better than the great majority - at least to me. It's inventive and demonstrates some sort of understanding of composition, of what works, when to turn it up full, when to cut back, and so on.

Anyway, it would have been a tape on my Do Easy label, but first I got a bit freaked out by the artwork which Jez came up with - which neither of us seem to have a copy of any longer - and then we fell out due to my being a massive arsehole, or at least carrying off a convincing impersonation of one, for shameful reasons I won't go into here. We're back in touch again, after all this time, and on good terms at last, although we still need to properly thrash it all out over a few beers. Anyway, the upshot was that the tape was released on the label run by Trev Ward of the Grey Wolves, whatever it was called that year.

It makes me very happy to be able to share this tape, and to once again be on good terms with its creator. Enjoy! I'd add play loud but I think that's probably a given.


Download The Glory of Punishment by clicking on this link.