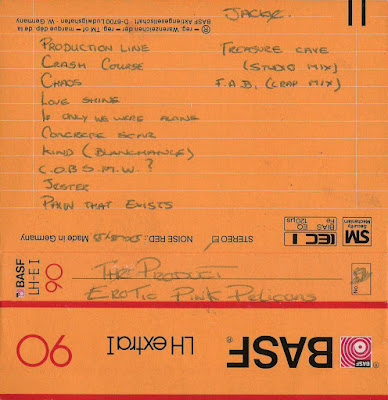 The Product were two blokes with a pile of synths, drum machines, at least one guitar, and sharp flat-top haircuts of a style which was pretty popular in the Kentish town of Chatham in the mid-eighties. I think I saw them two or three times, most memorably at the Good Intent in Rochester. For a band playing what was essentially slightly angry Blancmange they were pretty incredible live, despite the stiff competition of a million rock and roll bands with actual drummers, about half of which had featured the mighty force of Billy Childish at some point or other. At least some of the Product's stage presence was probably down to the novelty of a song about fellatio (which would later be covered by both the Cure and Morrissey) and a substantial following of local fans ready to engage in the dispensation of lively and good-natured violence at the gigs. With hindsight it seems odd that a band who sounded like this should have accrued such a following of keen Special Brew enthusiasts, many of whom were conveyed to the concerts by means of scooter, but that was Kent in the 1980s for you, and it made sense at the time.

I've no idea what became of the Product, but this stuff still sounds fucking great to me even now, thirty years later.

No idea how I even got hold of this tape. I was probably drunk.

Download the twelve songs and cover by clicking on this link.

Return to Index
Posted by Lawrence Burton at 18:58

Email ThisBlogThis!Share to TwitterShare to FacebookShare to Pinterest
Labels: Product