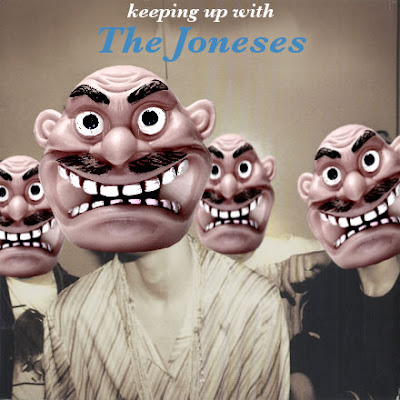 The Joneses were John Jasper, just one bloke with a portastudio who lived around the corner from me in Chatham, Kent. John was musically prolific, recording his own rhythmic dub material heavily influenced by Adrian Sherwood and the On-U sound under the name Regular. We also collaborated on a cassette recorded as Illyana Rasputin, and then there was all his other stuff - things which just never quite seemed to fit in anywhere else. Foremost amongst this most severely mutated material was one side of a cassette he gave me containing these fourteen tracks. The Joneses were unlike his other imaginary bands, particularly in terms of the raw force of sarcasm utilised during recording - assuming it was sarcasm, because frankly it was sometimes difficult to tell what the hell he was playing at. The Joneses most obviously rips huge streaks of piss out of the Smiths, but also seems to take sideways potshots at Mark E. Smith, the Cocteau Twins, and possibly Alan Bennett. The other side of the tape appeared to be taken up by something called Reg Varney's Mobile Coconut Shy.

John was a lovely guy but a pain in the arse, one of the least reliable, most pathologically flaky people I've ever met. He would lend me tapes of Keith LeBlanc albums and swear blind they had been recorded by a friend of his, some guy who lived in Devon. Then he was going on tour, playing bass with Wolfgang Press - really he was. He would fail to show if you arranged to meet him at the pub, or you would go around to his house and he'd pretend he wasn't home. He seemed, at times, a bit mad, and thus provided some evidence in support of that equation about the thin line dividing madness from genius, as expressed in his music. The Joneses, with all its deliberate mistakes, tape distortion, pointed crash edits, and armpit farting noises is a long way from the Barron Knights tradition of satire, comic send up and note perfect pastiche, so far in fact that it exists more or less on its own terms and as such predates Chris Morris and Blue Jam by nearly a decade.

I don't know how well this stuff will translate. Maybe you had to be there. All I know is that the Joneses still make me cry with laughter a quarter of a century later.

Download the fourteen songs and cover by clicking on this link.

Return to Index
Posted by Lawrence Burton at 06:57