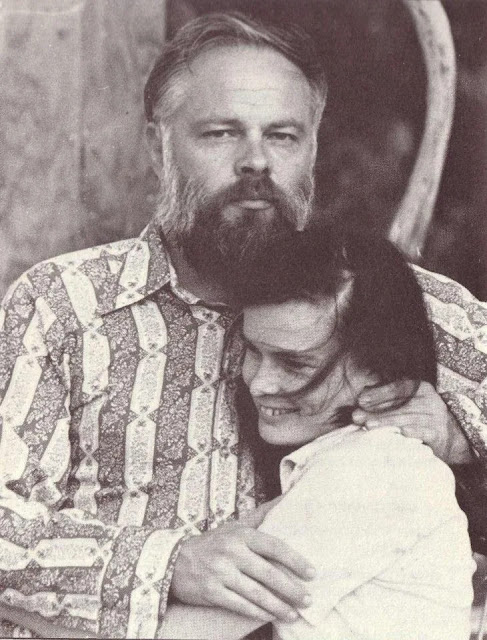 Week four of the end of the world (at least here in Texas), and week two of me sharing digitised spoken word or dialogue tapes in the vague hope of helping someone, somewhere get through the lock in. This time it's Philip K. Dick, and I'm sure you will have heard of him seeing as the media is busily turning every last note he ever left out for the milkman into blue and orange action thrillers wherein various chiselled men resembling Tom Cruise stand in the rain and wonder if they are themselves real. One or two of you may also recall that he wrote novels, and a lot of novels, and novels which were mostly great. It's the novels I'm interested in, probably because I'm a snob and I think I'm summink special but I ain't all that, or I be a hater, or something along those lines. If you're a massive fan of Blade Runner or some associated bingetastic Netflix crap but haven't read any of the guy's books, this probably won't be of much interest.

I have a couple of Mr. Dick's interview tapes, one dating from 1974, one from 1981, plus a recording of some spoken notes he made for a work in progress, elements of which you may recognise. The 1974 interview (with Paul Williams) is pretty lucid, occurring at the end of the year in which Dick famously encountered the pink beam of light. The 1981 interview (with Gregg Rickman) dates from shortly before he died, and is kind of wild, but somehow works better on tape than in print, which fails to carry some of the tone. Both appear in the excellent The Last Interview published by Melville House. If you've read much Dick, and particularly if you've had a go at the Exegesis, you should find this stuff pretty interesting.

The stuff appears in reverse order because a) that's how it was digitised and I couldn't be bothered to copy/paste the 1974 interview to the beginning of the file or b) because, as Phil discusses in the Exegesis, time is running backwards, which we know from the contradiction of how evolutionary forces bring form from disorder, and universal entropy which seems to resemble this same process in reverse. Therefore time is running backwards and 1981 comes before 1974.

This material derives from tapes sent to me by a Welsh bloke back in the nineties, although I'm not sure where he came by the material. I seem to recall seeing bootleg cassettes of Dick interviewed on the counter at Compendium in Camden right next to the Bukowski stuff, but who knows? I can't seem to find any officially released version of this material, so hopefully I'm not stepping on anyone's toes here, and no attempt is made to supercede established copyright etc. etc., although if my sharing these is somehow keeping money from finding its way to anyone's wallet, I'm pretty sure it isn't Phil's. If you enjoy these recordings, maybe buy a few of his books, because as I say they're mostly great; or maybe buy a few of Tessa's books because I'm sure she would appreciate it, and I can strongly recommend her The Darkening of the Light as a powerful and compelling novel in its own right.


Anyway, click on this link and bag yourself a heapin' helpin' of Phil.

Normal noisy service will probably be resumed next week.

Return to Index
Posted by Lawrence Burton at 12:54